We wanted to take some time this week to get various bits and bobs in the game back in shape - but don't worry! We've still got some news about Wishes, the Elder God Wars, and the results of the Rex Matriarchs Player Gallery Competition to sink your teeth into.

Elder God Wars: The Next Chapter

Following the events of Azzanadra's Quest, Gielinor is in turmoil. Friend is now foe, and the real enemy is still looming on the horizon.

So what's next? Well, we can't give the game away just yet - but we can tell you that the next chapter of the Elder God Wars storyline will be revealed this Friday.

Listen out for rumblings throughout the week, and tune in to Twitch.TV/RuneScape at 17:00 Game Time this Friday, May 21st for the full reveal. We'll see you there!

We know that many of you are anxious to hear more about the Wishes we promised you after the Login Lockout, and we can assure you that the Ninja Team have been hard at work on them.

You can expect more news in tomorrow's livestream and we'll be sharing even more information in a dedicated newspost a little later in the week - but we can share a little bit right now.

The Wishes will arrive in the form of a Guardian's Gift, which you can open to choose the Wishes you'd like to receive.

The release is currently planned for Monday May 24th - so get that date in your diary!

Our friends at Prime Gaming have a special treat for you. For the next 10 months or so, RuneScape players who link their Prime Gaming accounts will be able to get their hands on a variety of exciting goodies.

This month's reward is 7 days of RuneScape Membership - just the ticket if you're looking to try out everything the game has to offer!

You'll be able to claim your membership from May 18th (that's tomorrow!) to June 22nd. To do so, simply link your Prime Gaming and RuneScape accounts. More information can be found here when it goes live on May 18th.

Here's your chance to get all the info you could possibly want about what's coming up in RuneScape, straight from the source! You'll also get your first look at the Wishes we promised after the Login Lockout, so be sure to tune in if that's your jam.

The J-Mods are questing! It's Azzanadra's Quest like you've never seen it before, with behind-the-scenes tales, accidental-on-purpose lore drops, and non-stop J-Mod hilarity. Come join the fun!

The results are in! We loved seeing your amazing entries - in fact, we had real trouble picking a winner! After much deliberation, we've settled on the following: 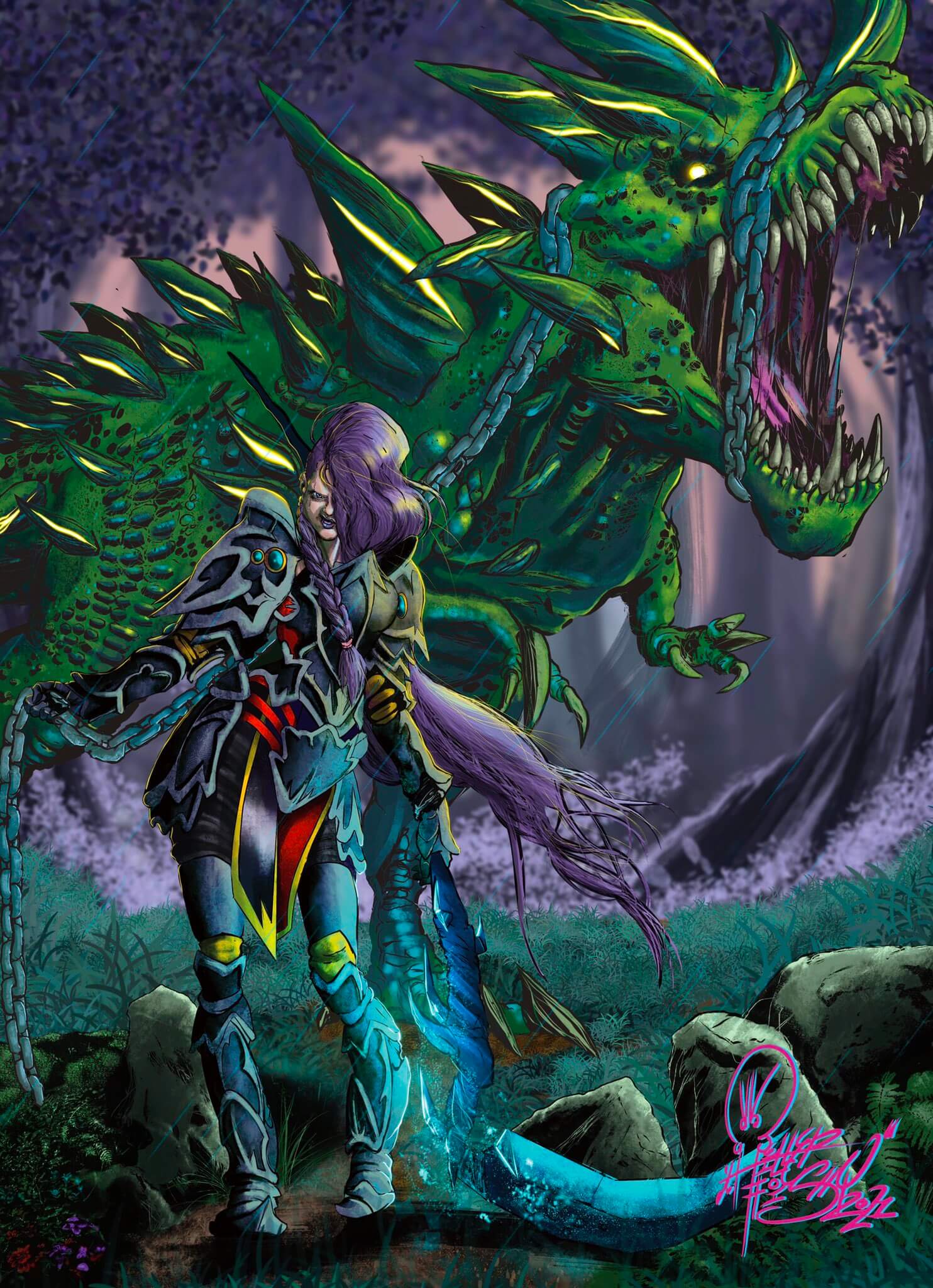 These two artworks impressed us so much that we couldn't pick between them!

We love the level of detail on Killerfishy24's artwork. The reflections in the puddles, the slobber on the jaw, the sinister grin on the player character - it's just stunning! Top marks from us.

Speaking of detail, Scaly_Winged's artwork was a delight! Every time we look at it we find something new to gawp at. We'd love to see this scene play out in game - especially if it looked this pretty!

Our two winners will both walk away with a King Black Dragon building set. Congratulations to the both of you! 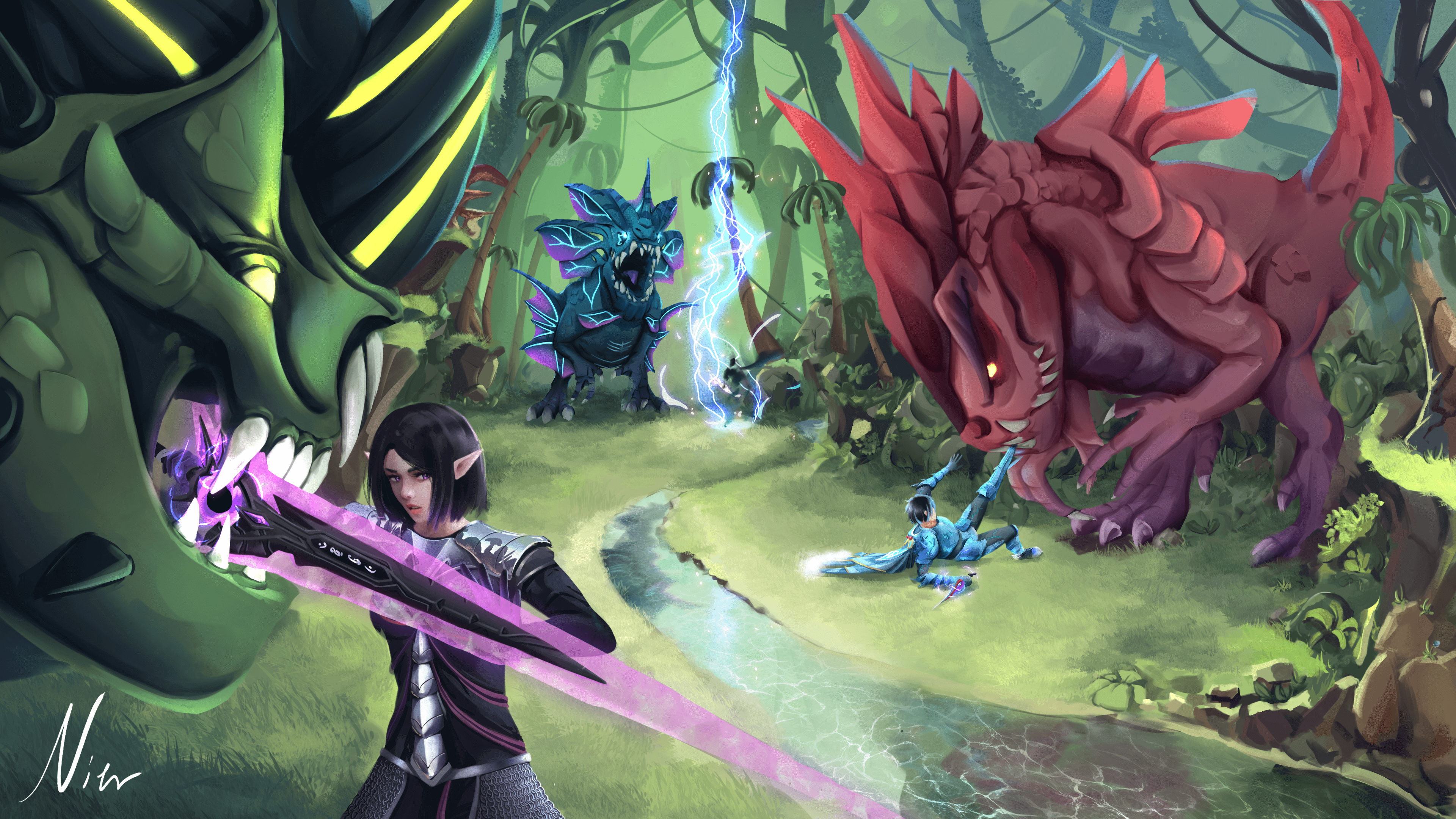 We always love to see your player characters, although some of these ones look to be in a spot of trouble! We really liked the framing of this one, with that lovely detailed sword up front. x nier x, the artist, will walk away with 3 Bonds! 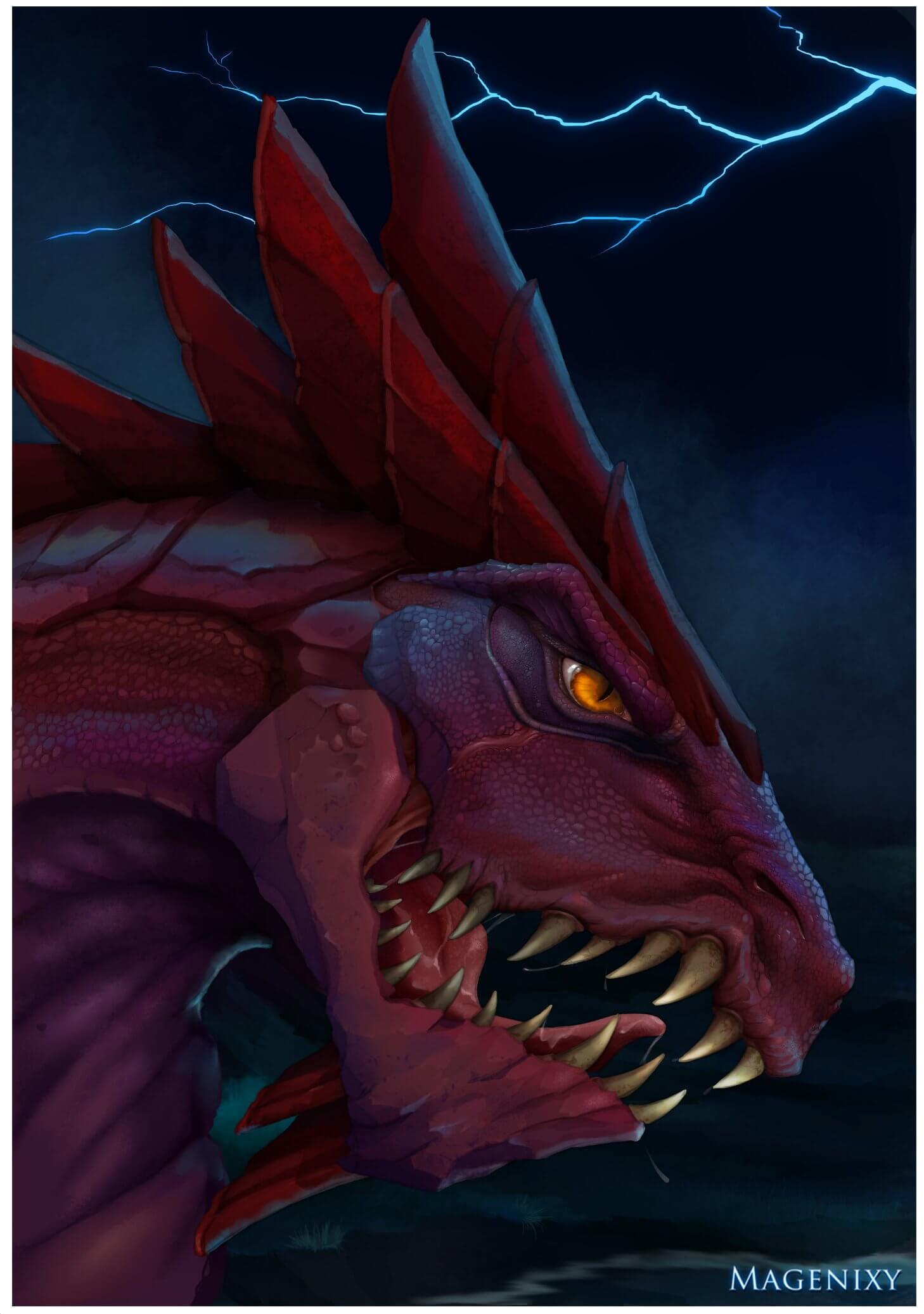 Eek! Magenixy's really captured Orikalka's rage in this piece. We wouldn't want to get caught in those jaws! As a runner up Magenixy will receive 3 Bonds. 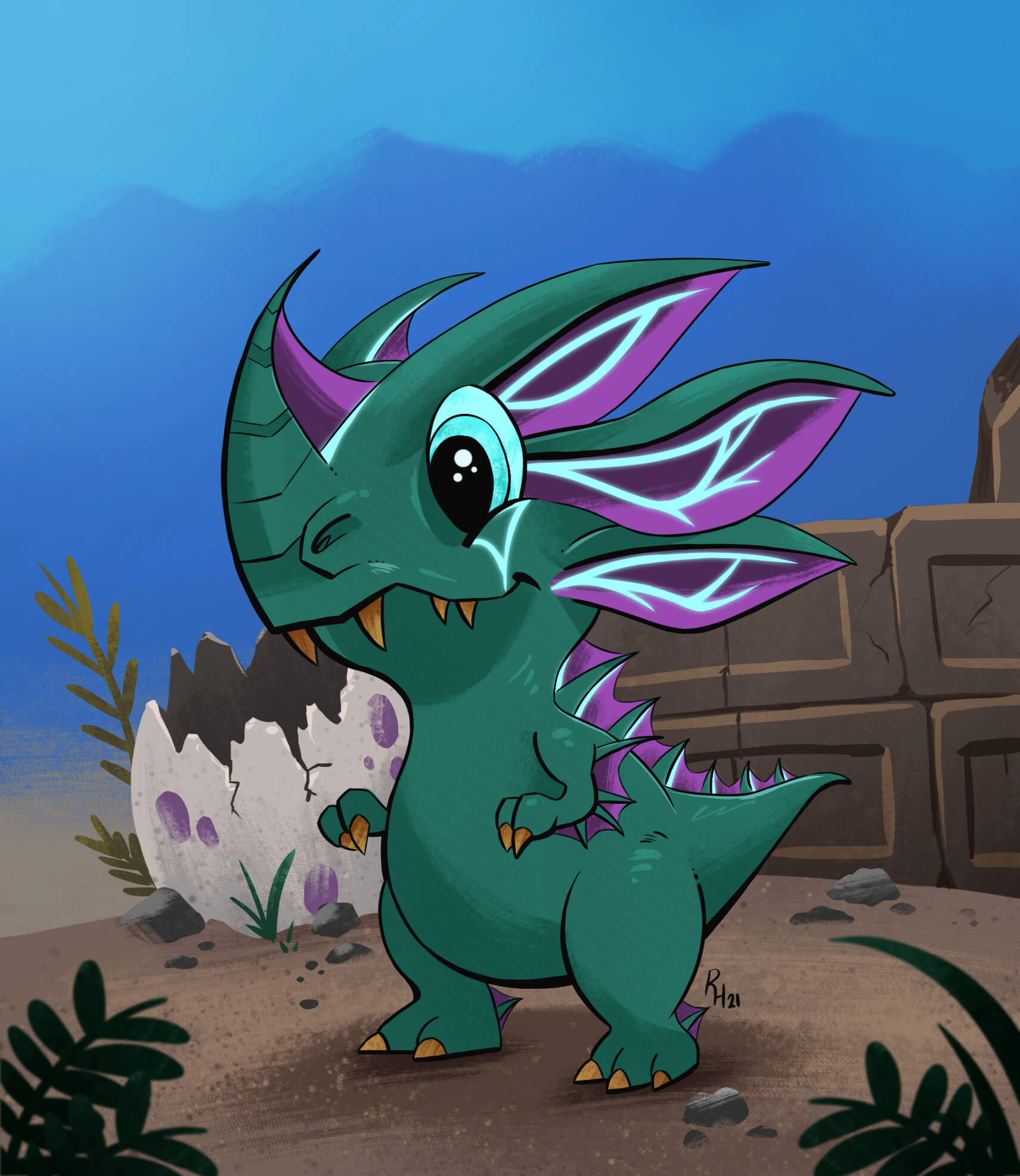 Fallen Urge has given us the urge to give this adorable little creature a cuddle! This art style is so playful and colourful - we can't help but go “Aww!”

As we said before, we received so many amazing pieces of artwork for this competition. We'd like to give honourable mentions to the following artists and their fantastic handiwork:

Flick through our gallery of honourable mentions by pressing the arrow buttons at the side or selecting an image at the bottom. 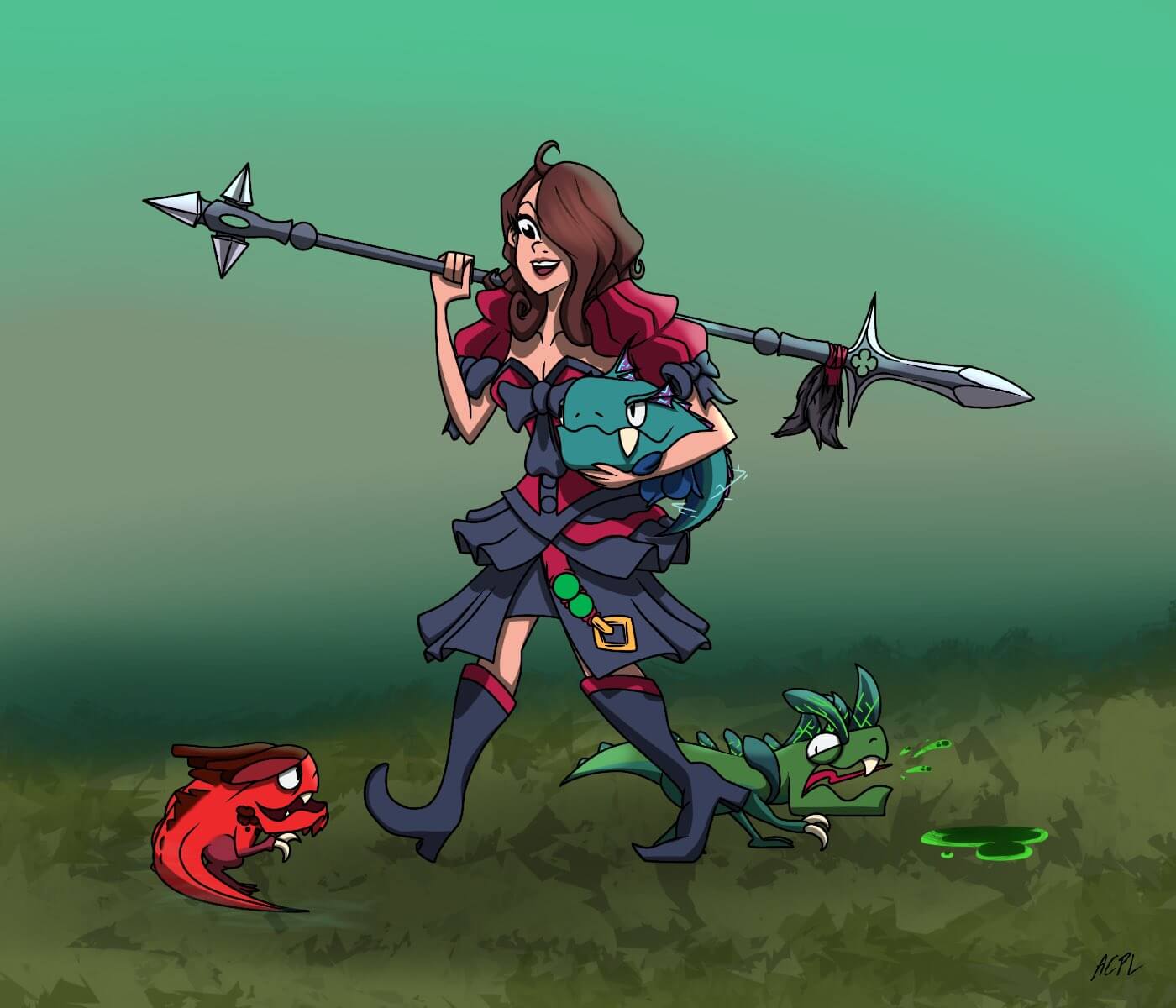 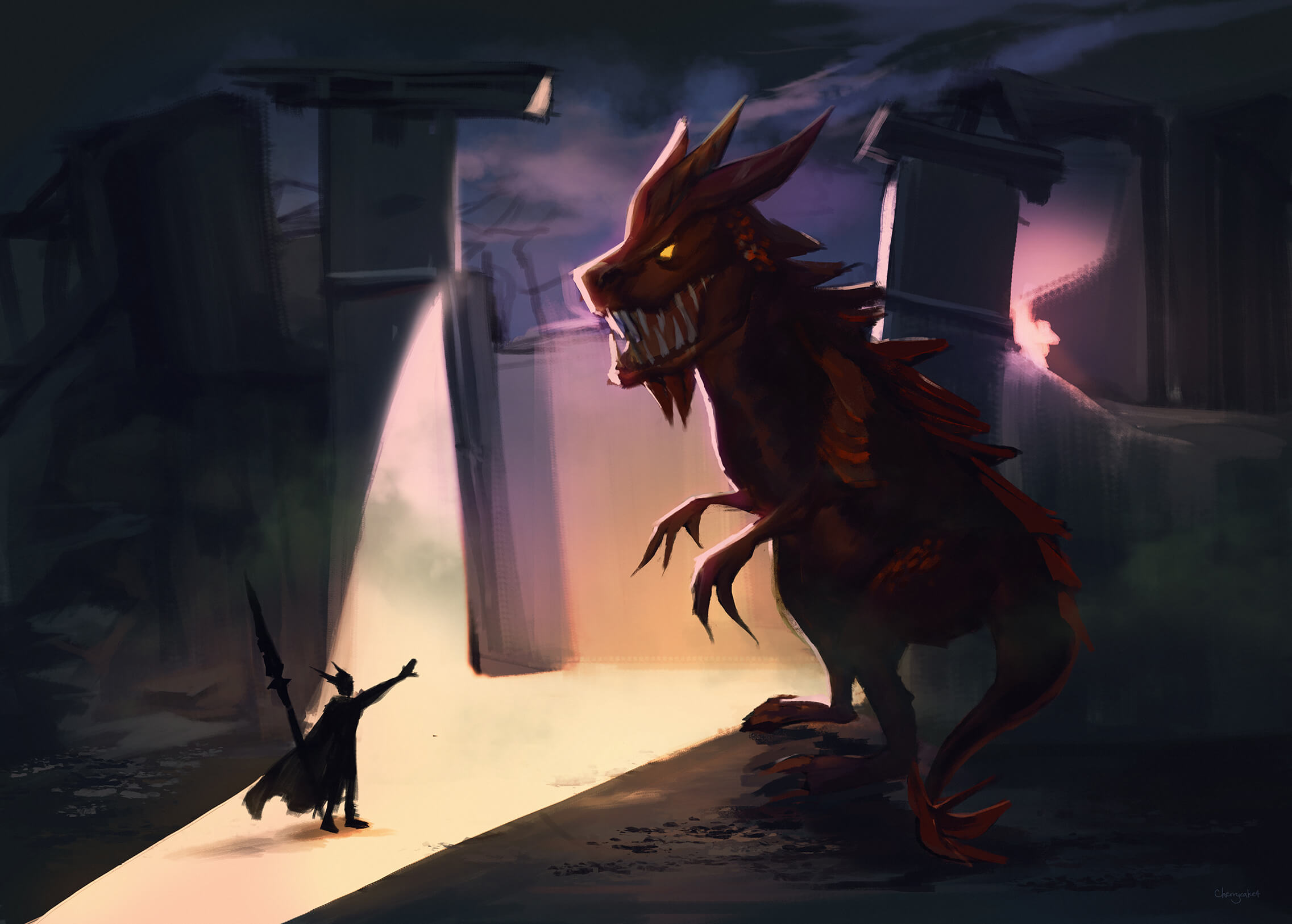 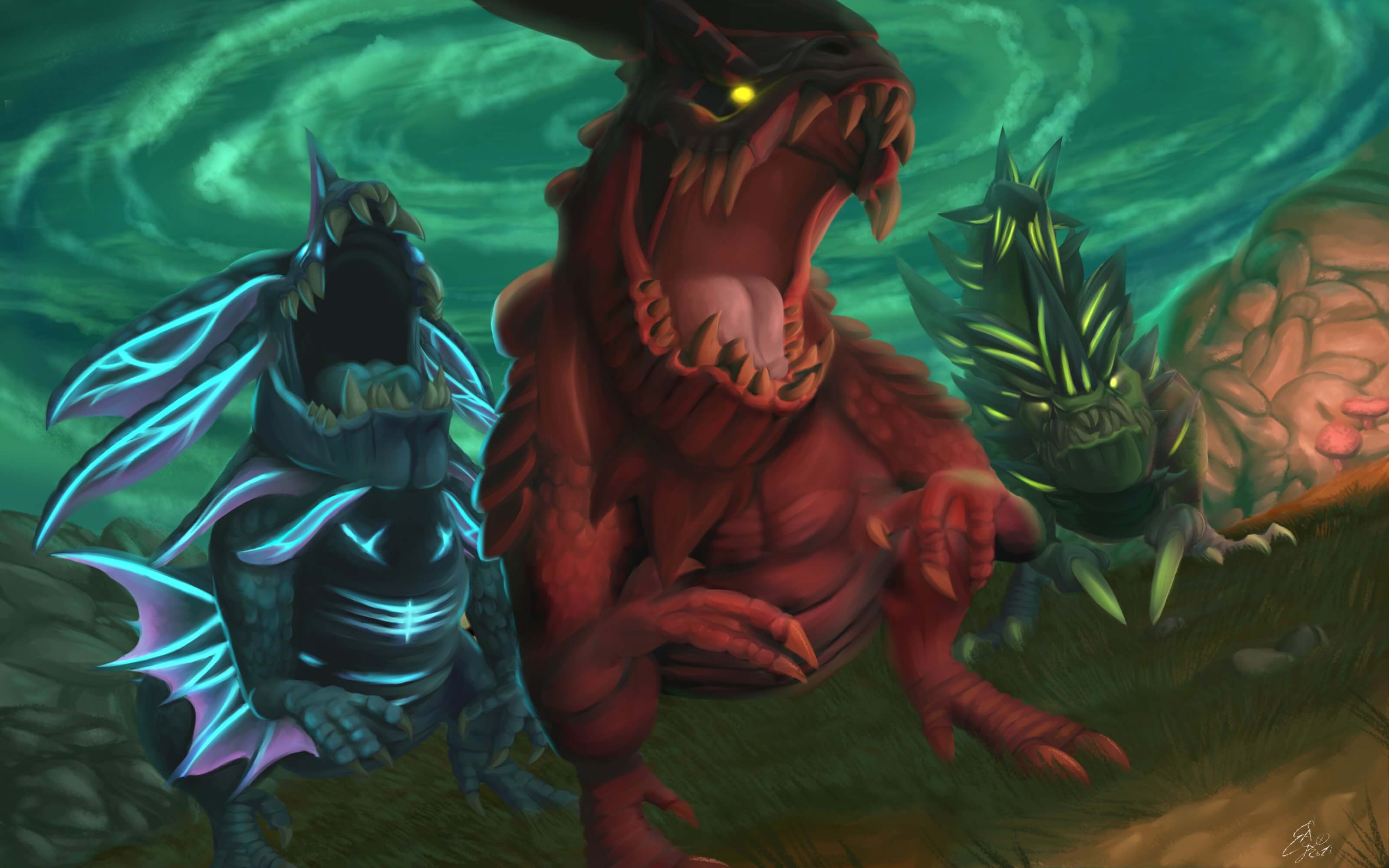 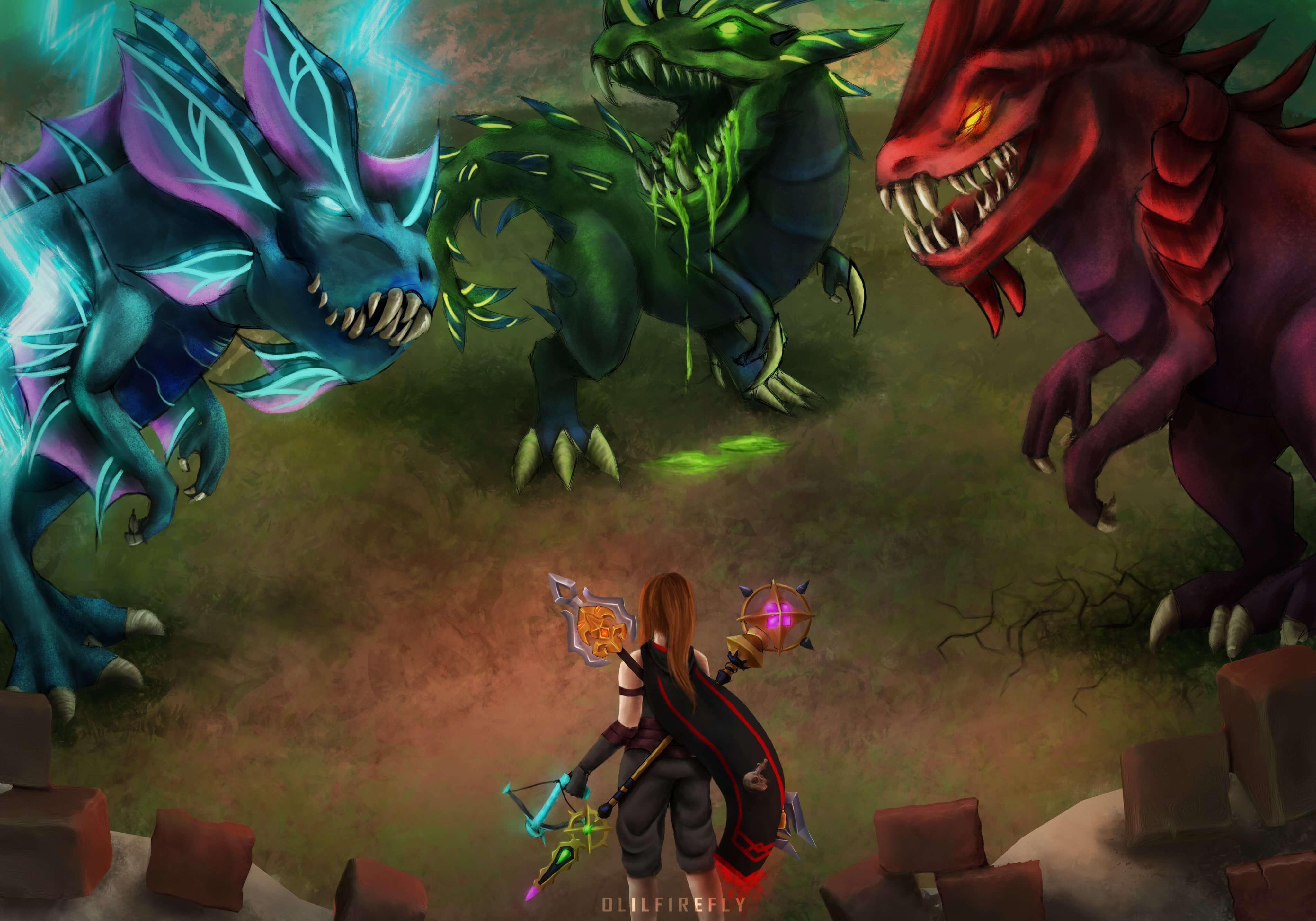 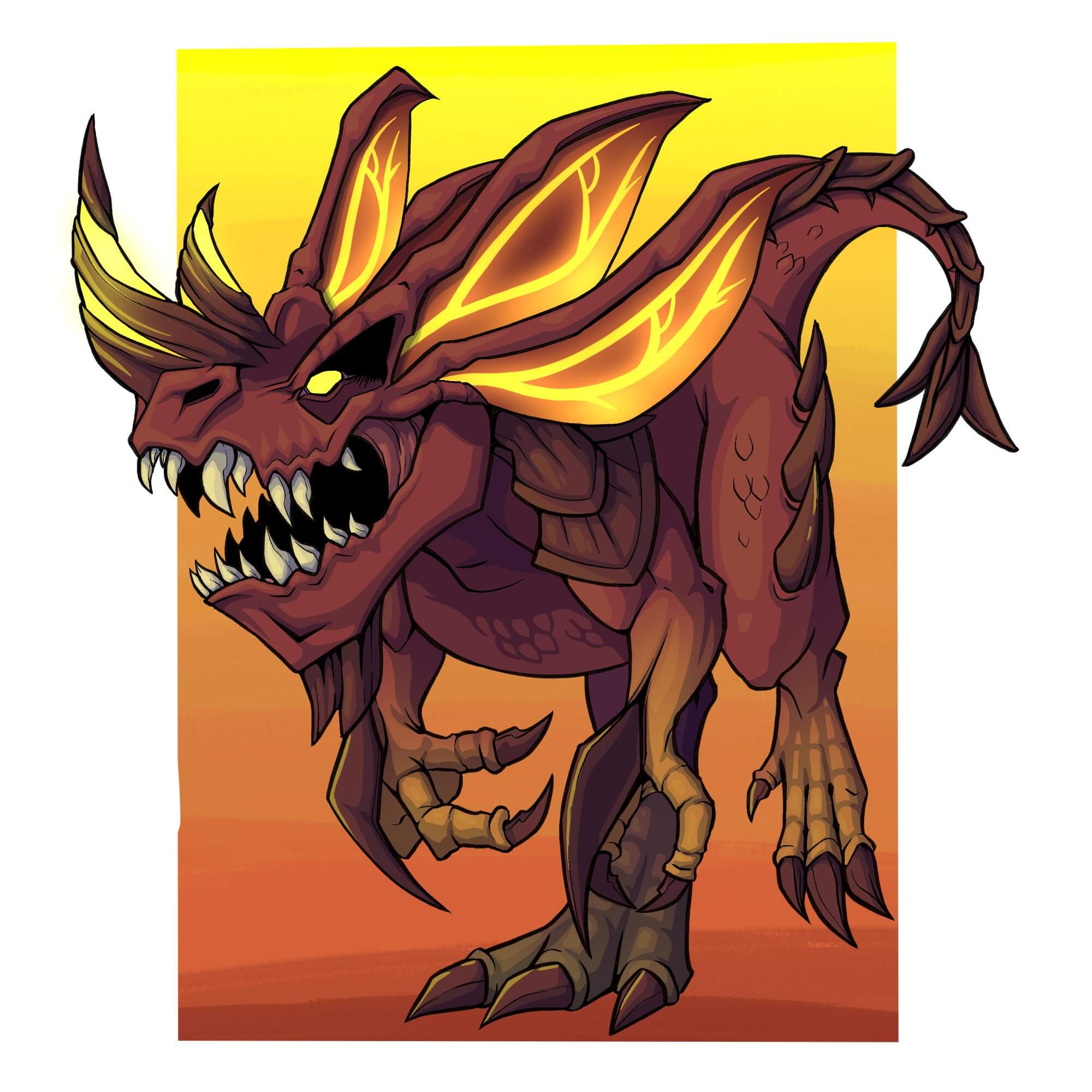 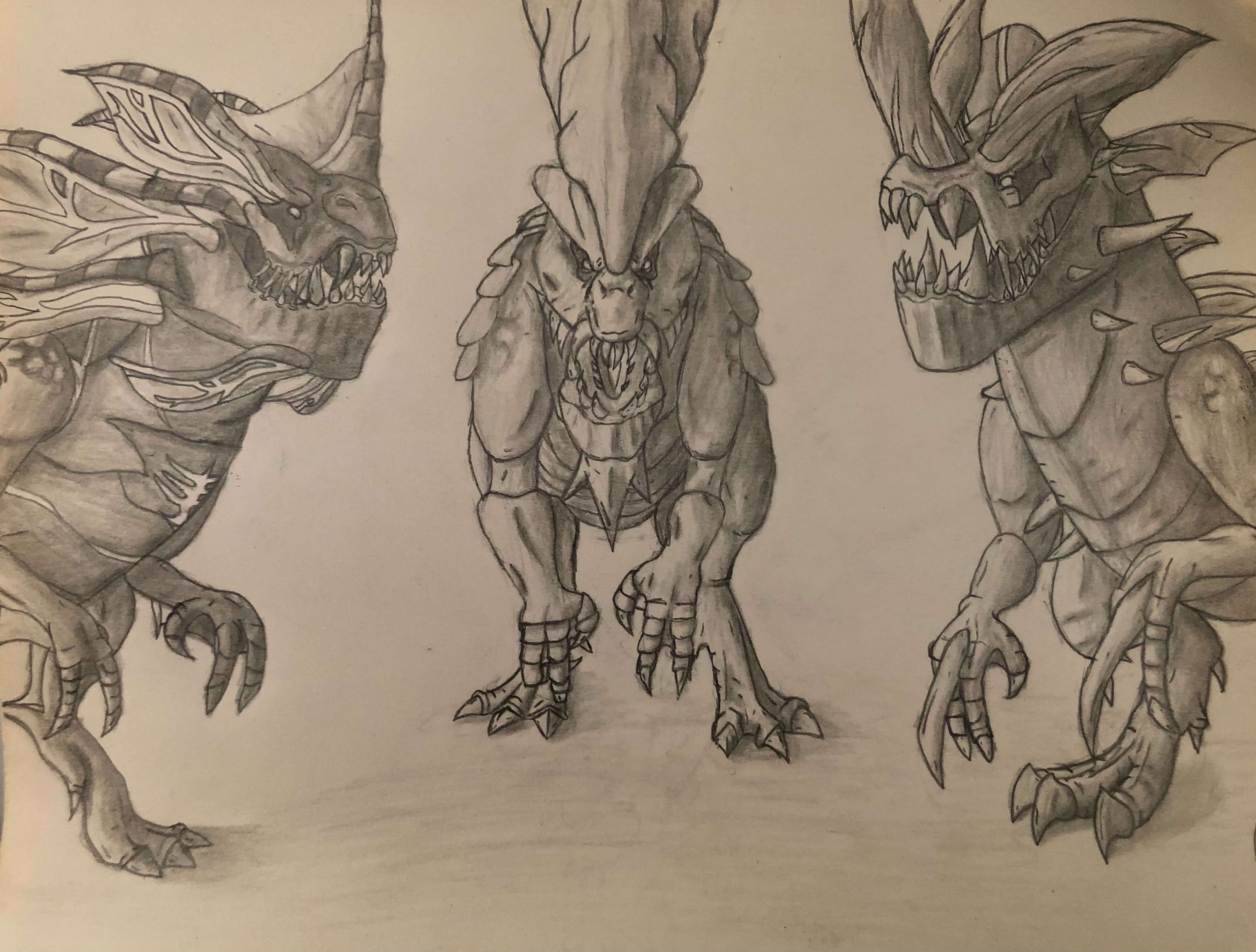 
Did all that gorgeous artwork inspire you to take on the Rex Matriarchs yourself? Then you'll want to watch Nuzz Nuzz's in-depth PVM guide and level up your combat game! This video is jam-packed with tips, from simple ways to stop yourself from dying to overcoming discouragement. You can do it! 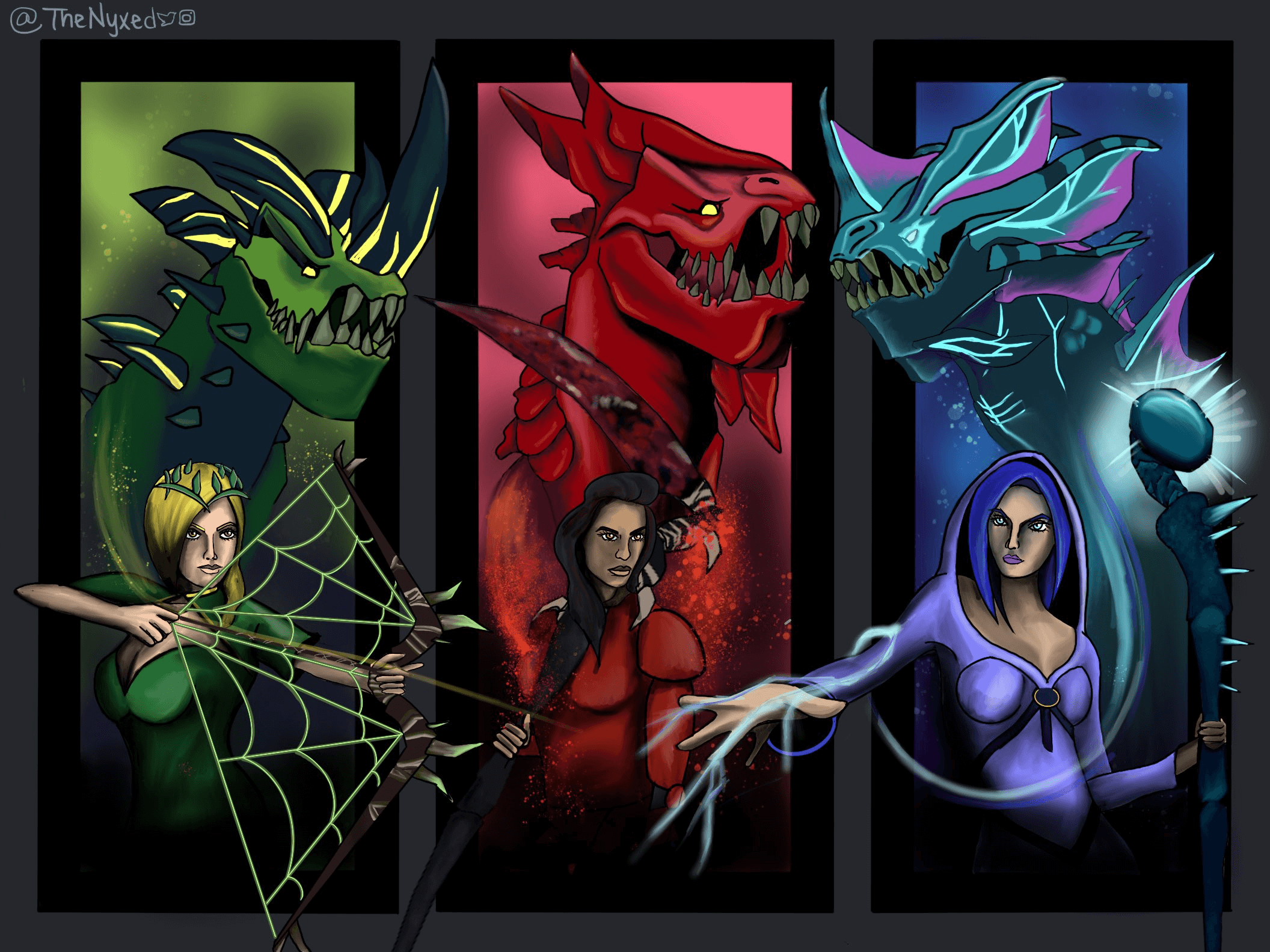 TheNyxed just barely missed the deadline for our Player Gallery competition, but we think her human-style Rex Matriarchs are awesome, so we're featuring them anyway! We love the thought that went into these designs. Which one's your favourite?

We're going mad for the Matriarchs this week! Even our featured Pink Skirts event will see you taking on the terrifying trio. To join the battle, head to the Rex Matriarch Lair on World 68 on May 20th from 20:30 to 21:30 Game Time.

For more info, check out the Pink Skirts page!

Need some help with those dino dames? Make your way to the Guardians of Gielinor Discord server, where RuneScape's PVM pros are simply bursting with tips and advice.