It's Dailies & Distractions & Diversions Week - oh my! - and there's a whole host of bonuses and buffs for you to look forward to. In other news, the rented item changes we spoke about last week are coming into effect, and we've got some very exciting news about mobile. Read on to learn more!

RuneScape on Mobile: Coming this Summer!

In case you missed Mod Warden's message, here's the news: RuneScape will launch on both iOS and Android this summer, and pre-registration is live right now!

But that's not all - you'll also have the chance to work together and earn awesome rewards! The more registrations we get, the more rewards you'll unlock. Here's what you'll get for each tier:

Plus, if registrations reach Tier 5, everyone who signed up will get a whopping 7-day 50% XP boost on launch!

So what are you waiting for? Head to the app store or the Google play store and pre-register today!

The third week of Awesome April is about three things: Dailies, Distractions and Diversions! Here's what you can look forward to:

Set sail for fun with an extra 10 voyages a day, adding up to a total of 25! On top of that, voyages will also return 30% more resources or trade goods, except in cases where the reward is random or unspecified. You'll still get the same amount of XP as you normally would from this activity.

Lastly, the Barmaid's special voyage will be available throughout the weekend as well as on Thursday.

Your daily use of the Rune Goldberg machine will provide double the amount of Vis Wax, to a maximum of 200 units.

During the event, all Daily Challenges will automatically be extended for free! This includes Challenges that you've re-rerolled.

You won't be able to extend the Challenges beyond this point.

Several Distractions & Diversions have various extras this week. You may now:

These boosts are not available to Ironman accounts.

For the whole week, timers on the Player Owned Farm will be running twice as quickly - so animals will grow twice as fast and the baby spawn chance will trigger twice as often!

You'll also get the following bonuses:

These bonuses are all available to Ironman Accounts.

For the duration of the week, shop stock will be doubled for all items that are usually restocked at midnight. This includes the following:

This bonus is available to Ironman accounts.

After last week's heads up, various changes to rented items are now in effect.

Firstly, the Wealth Evaluator tool is now free for all players. Wealth Evaluator objects, which were previously needed to access the tool, will be removed from all inventories on log in - if yours is still there, simply click on it to clean it up.

Secondly, the following objects can now be purchased using RuneCoins from NPCs or in-game interfaces:

*Note: Ironman accounts will not be able to purchase Clan Citadel Booster Packs, as before.

Lastly, the Morytanian, Kharidian, and Masterwork Music Boxes, along with the Achievement Banner, are now available from Diango's Item Storage.

Join us for a first look at some brand new improvements and refinements coming to one of RuneScape's skills. Which skill, you ask? You'll have to tune in and see!

Mods Raven, Jack and Hooli return to Azzanadra's Quest for another round of loresome gameplay, developer stories, and questionable voice acting.

This week on RuneTube, Agita & Plum Play are on Part 12 of their 'hardcore idiot journey' series - their words, not ours! Today they're building up reputation on Menaphos, so grab your waterskin and have a watch! 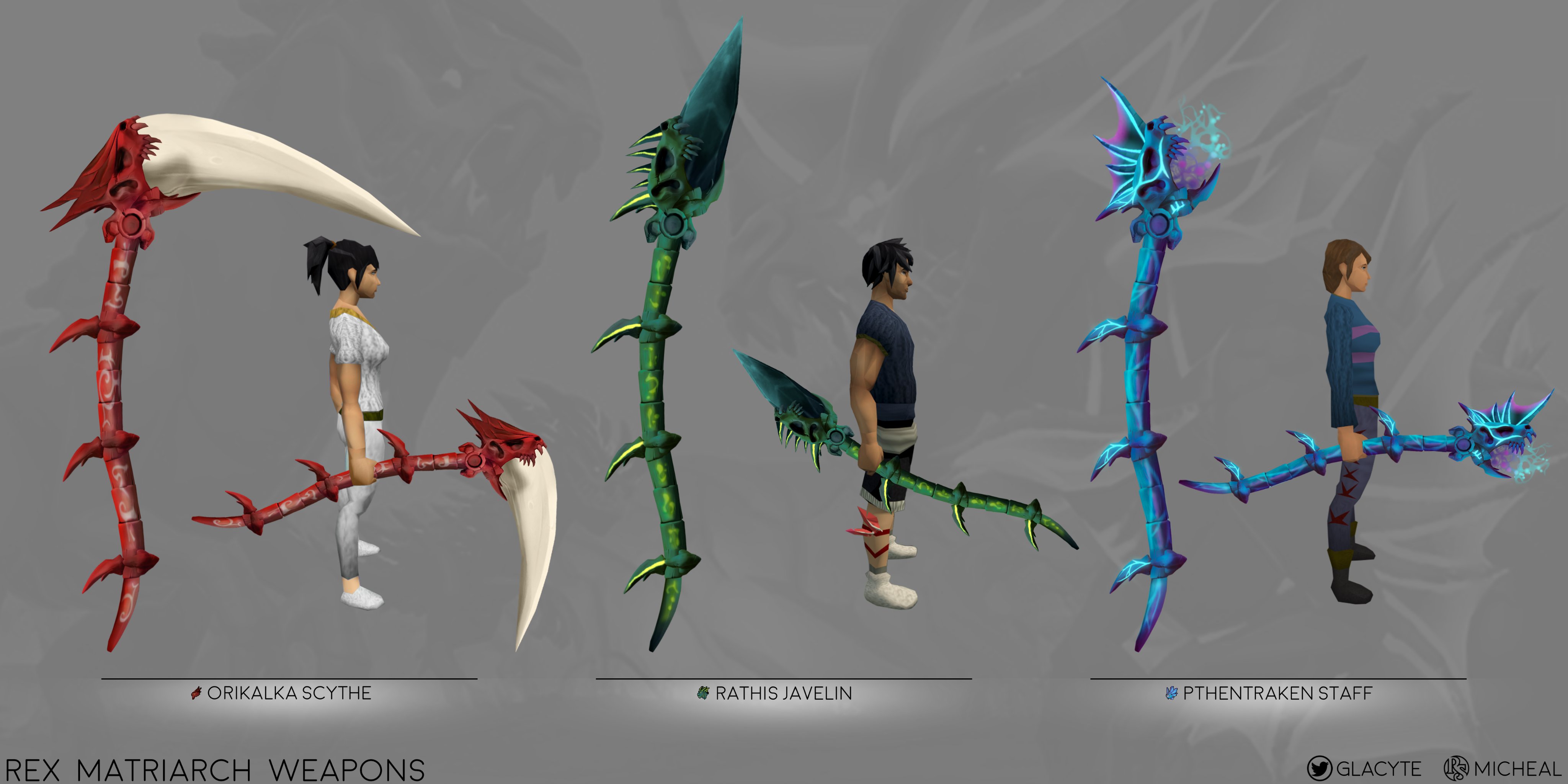 Woah, these Rex Matriarch-inspired weapons had us cowering under the desk! Excellent work, Glacyte - but, er, watch where you point those things, 'kay?

This week's screenshots come courtesy of the official RuneScape Discord community. You can join here.

By Sir Theodore the pancake

This week the Pink Skirts are on a Mega Duck Hunt! To help Nanci, Nastyfruit and Ascensus track down the monstrous mallard, head to the Warforge! on World 134 this Saturday, May 1st, between 16:00 and 17:00 Game Time. Don't forget your breadcrumbs!

The RuneScape Team.
Back to top