This Week In RuneScape: Ninja Strike 23

Hello, and welcome to another instalment of This Week In RuneScape! Today we'll - hey, wait, did you see that? There it is again! This can mean only one thing: the Ninja Team are back with another Strike! Let's try and catch up with them...

We managed to pin down the Ninjas to talk about their latest Ninja Strike - a Scattershot update that aims to make all kinds of improvements across the game.

First up, we have a much-requested new feature: Legendary Pet overrides! You can now change the visual appearance of your Legendary Pets to any companion, boss, or skilling pet you have unlocked. To do so, head to the Pets interface, where you'll find a new checkbox to enable this option.

Next, the Ninjas followed in Mod Iago and Mod Ramen's footsteps and headed to the Lost Grove, where they've been busy gathering up Grimoire Pages and adding them to the loot tables of the Slayer creatures. Speaking of loot tables, they've also rebalanced Solak's drops and made them a little bit more rewarding.

But that's not all! Check the Patch Notes to see everything the Ninjas have been up to.

We've made some tweaks to the appearance of the Home Screen on mobile. Basically, we've switched up the layout to make certain things more visible, including your player name, currencies, and the number of the world you're on.

We've also removed the 'Store' button on the HUD.

Rest assured, we're paying close attention to all your feedback, and our mobile teams are working on more improvements as we speak. Keep those ears to the ground!

Spoilers abound as the J-Mods explore the shadowy depths of Senntisten in this dramatic Let's Play livestream!

This adorable felt Baroo is the creation of Mod Grandma Abi. Our only complaint is that we can't reach through the screen and give him a gentle pat on the head.

By the way, if you want to see more fabulous creations like this one, check out the RuneScape Art Community Discord server!

This week's screenshots are a little different - PureDarkRed, who shared them on our Discord server, has been taking full advantage of our mobile launch to adventure on the go! Where are you playing RuneScape on mobile?

Forget the Olympics - the Rogue Ninja Civilization are launching a series of summer games that could see your clan taking gold! If you've got a cracking Castle Wars strategy, if you have no Trouble Brewing, or if your Great Orb Project skills are greater than most, then this is the event for you! 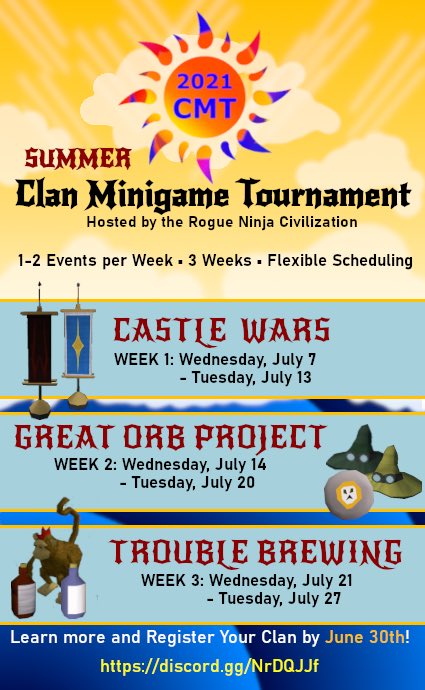 You can find all the information you need on their Discord. Registration closes on June 30th, so hop to it!

In this week's Pink Skirts events, you'll be battling the Rex Matriarchs! Meet Pippyspot and Boss Guild at the Rex Matriarch Lair on World 88 this Wednesday, June 30th, from 20:00 - 21:00 Game Time to join the battle - but be sure to come prepared!

It's Pride Month, so this week's shout-out goes to The Rainbow Collective, an awesome clan with an LGBTQ+ focus. Why not swing by and make some new friends?