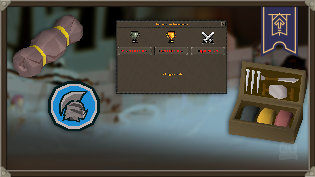 This week we’re making changes to Tombs of Amascut and Group Ironman Mode!


We've updated how the supplies work:


The summary board will now acknowledge any member that has left mid-raid, giving you a fresh new way to flame your salty teammates.


Fixed an issue where the Deadly Prayers Invocation was showing incorrect stats on the Summary interface for Prayer effectiveness.


The following items have now been marked as 'valuable' to stop any accidental drops:


Next up, we've made some further changes to the deactivation settings for Ironman mode. Iron players have already been able to set a permanent flag on their account, preventing them from ever changing their status. As many of you had the choice made before the introduction of the Unranked Group Ironman mode, we are giving you another chance to change this. Please note that these choices are fully permanent and will not be subject to review by our Player Support team – so don't take this decision lightly! 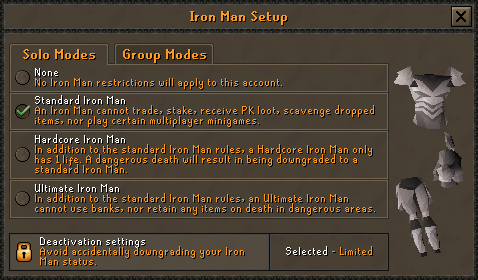 Solo Iron players who are currently 'permanent' will receive a message upon logging in, stating that their permanent settings have changed to 'limited'. This means you can become an Unranked Group Ironman if you wish. However, you may still not become a main account.


Visiting the Iron Tutor in Lumbridge will allow you to choose the permanence of your Iron status – and in case it hasn't yet sunk in, you will be warned about the ramifications of this decision before you're allowed to make it. 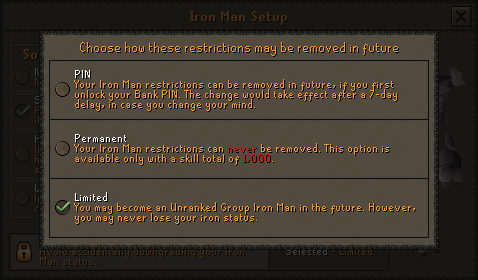 You don’t have to make this decision immediately and can continue playing however you wish while you think it over.


We’ve also been working on a variety of patches specifically for our Steam and Mobile clients:


Good news, everyone! We’re keeping the Wilderness Boss Rewards Beta open for another week, as we’ve lowered the Voidwaker’s special attack cost to 50% (down from 60%) – so hop on in and test it out!


We’ve also made some plans regarding Poison Dynamite, based on your feedback. Here’s our to-do list:


One thing we will not be doing is changing the poison type to Venom. We feel this to be overpowered, and it goes against the premise of this new item.


Last bit of news on the Beta front – the Quest Speedrunning Beta has gone fantastically, and we’ll be working hard to make improvements based on your feedback before it launches.


Thank you to everyone who participated in these Betas and sent in feedback!