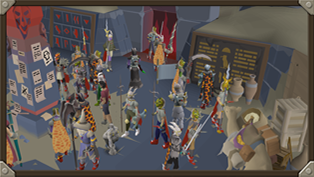 This week is packed with Tombs of Amascut tweaks! Read on to see what’s changed…


If you haven’t been living under a pyramid for the last week, you’ll know that our newest raid, Tombs of Amascut, is live and kicking with over one million completions so far!


We’ve been poring over the ancient scrolls (Reddit etc) to uncover your feedback– we’ve addressed a whole bunch of it! Keep reading for all the deets.


Overall, we feel like Zebak’s in a pretty good place (balance wise – we won’t comment on his swampy prison). He does, however, have a tendency to die off before he really gets going. We reckon a few extra Hitpoints will make the fight more challenging, without letting it drag on forever.


Although there’s a solution for every jug setup, player positioning can make it tricky to utilise this mechanic. Given how punishing Zebak’s roar is, we’ve made things a bit more consistent with this suite of helpful jug-based changes.


Akkha’s also pretty much functioning as intended. Our chief concern is that the enrage section of his fight is extremely punishing, especially at higher Raid Level. We hope that the above changes will help players feel like dodging the orbs is worth their time.


Additionally, an incredibly creative, tick-perfect kiting tactic known as ‘the butterfly method’ recently surfaced, allowing super-skilled players to take 0 damage and avoid all of Akkha’s special attacks. The method requires some pretty precise clicks, and we’re definitely impressed by the ingenuity, so we’re not removing it entirely. That said, we don’t want to negate the fight completely (or negate the effects of Invocations), so after a short while Akkha will switch things up a bit.


Ba-ba’s looking pretty healthy at the moment – considering the whole skeleton thing – although we have had some feedback regarding the bananas and sarcophagus damage. We hope these changes will make the fight a bit less frustrating!


We may be a little biased, but we think you’ll agree that visually and conceptually, the Wardens are a fantastic fight. That said, the balance is a little off.


As the final boss of the raid, the Wardens should be challenging and resource-intensive – but during Phase 2, arguably the toughest part, players spend more time attacking the core than fighting the boss.


These changes should ensure that the battle feels a little more back-and-forth for big groups and players with high-end gear, without significantly affecting smaller groups with less flashy gear.


Phase 3's skull mechanic deals enough damage that the surviving Warden is almost instantly pushed into the next skull mechanic. Players spend more time interacting with this mechanic than anything in the rest of the fight, so we’ve gone ahead and tweaked the pacing to keep you all on your toes.


Similarly, most groups have never even seen the fail condition for the skull mechanic – so we’ve tightened up the timing to make sure more of you get the full Wardens experience. Good luck!


Ba-Ba’s troop of baboons are definitely an engaging encounter, but their antics do mean that the Path of Apmeken takes longer than the other paths. These changes should make it a bit more reasonable, and properly reward you for moving fast!


This change aims to make 1-downs a little more reliable in groups where there may be big differences between the highest and lowest Mining levels.


Ambrosia and Liquid Adrenaline are both items we wanted people to opt in to if they felt needed, at the high price of losing out on other useful items.


When they were both available alongside Smelling Salts in the Chaos pack, players could get everything they wanted without any real decision making. We hope that these changes get players making more meaningful choices, especially at higher skill levels.

We noticed that grouping up for ToA could be less desirable because on top of the sheer number of obstacles to dodge, you’re also being more harshly punished for running into them. Previously, if two people were caught in the same AoE attack, the damage would stack, which could result in innocent players getting absolutely obliterated if they wandered into the splash zone. Now that’s fixed, players can group up and run headfirst into danger without endangering anyone else.


You’ll also notice that Monster Examine has been re-enabled, as promised. Enjoy!

We’ve been carefully monitoring the drop rates since release and have decided that some small changes are needed to keep rewards in line with the difficulty of the raid.


While Expert is significantly better than Normal Mode if you’re hoping for uniques, Normal is proving a bit easier than expected, and Expert perhaps a little harder. We want players to really feel the value of trying higher Raid Levels – hence the changes.


These changes ultimately mean you shouldn't see much of a difference if you're comfortably farming at 150 Raid Level, but you'll likely see more purples as you start pushing into the 200s.


We’ll be keeping a very close eye on this as further balancing changes come in and metas develop.


As with any major release, some pesky bugs have slipped through our net – and we’re not talking about Kephri!


So, without further ado, here’s what we’ve fixed or changed during the week. Please note that many of these were addressed in the ‘Your Feedback, Our Response’ section of last week’s newspost – this is just here to keep everyone in the loop.

Now that you're all up to date with what changed during last week, let's have a look at what we're doing today:

We’re keeping a close eye on balancing for both difficulty and rewards, but rest assured that we won’t be making any knee-jerk reactions. You can look forward to any balancing changes in later weeks.


We've made some early changes that should alleviate some of the world lag people have been experiencing; we don't think this will be enough and will continue working on the recent server issues. However, we do hope to see some improvements with this update.


Alright – who fancies a celebration?


In last week's newspost, we challenged players to race to complete the first Normal Mode and Expert Mode runs.


In case you missed it on our socials, we'd like to once again congratulate our Tombs of Amascut World First winners! 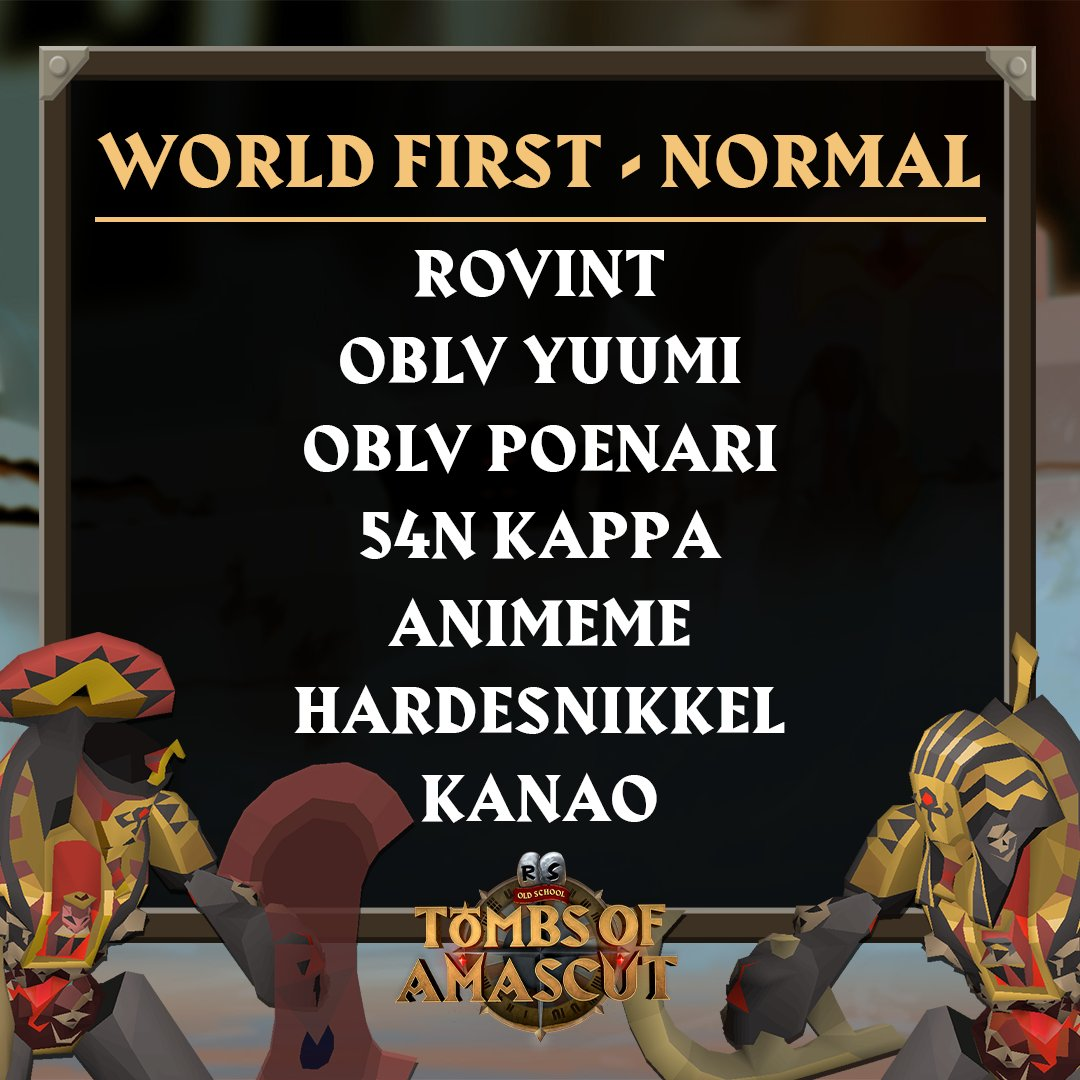 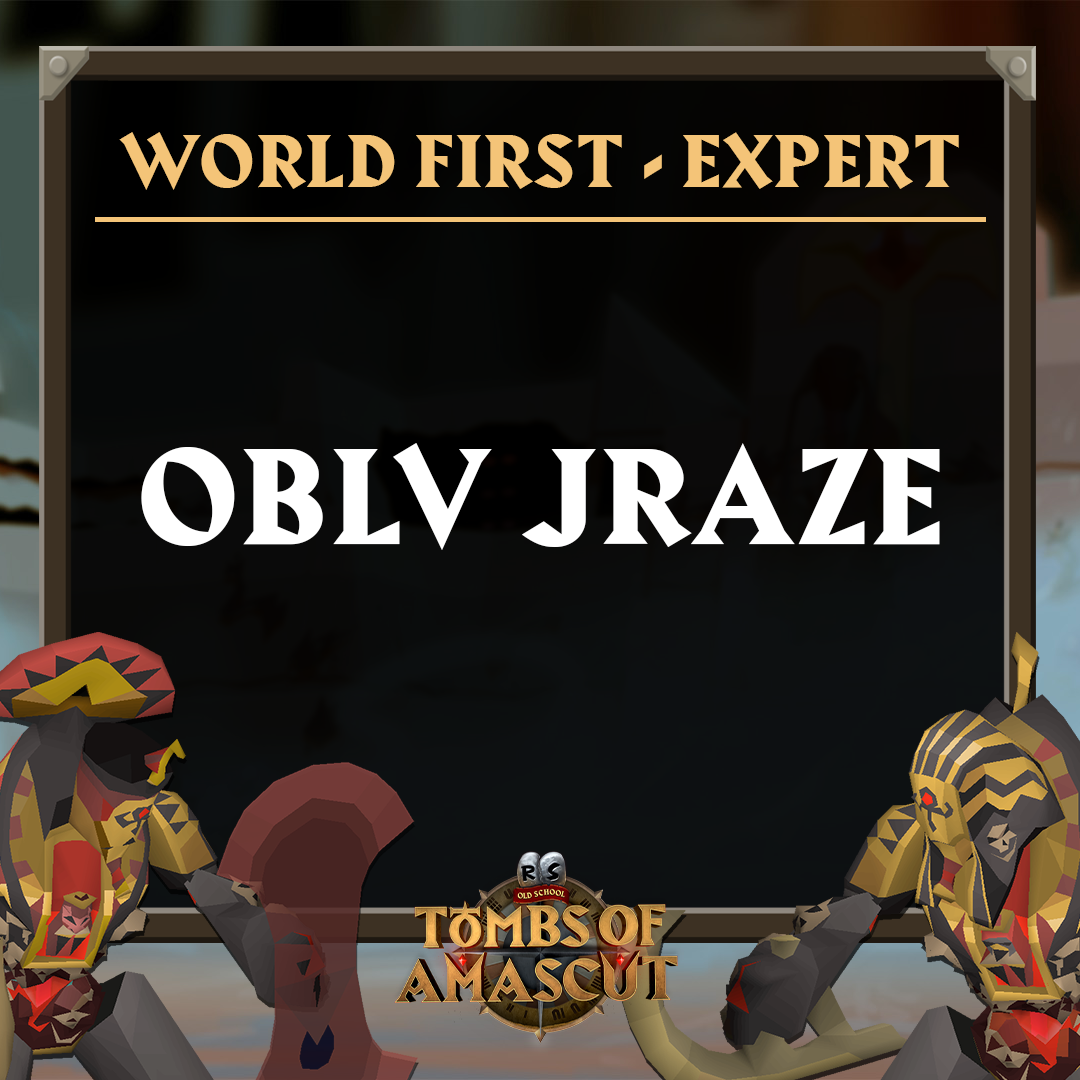 Congratulations to all of the World First runners! Everybody named above will receive 12 months of Membership, so keep a close eye on your in-game inbox to claim your prize!


Everyone else: don’t be disheartened! There are still lots of achievements to go for. We've started to see more than a handful of clears north of 400 Raid Level, who knows where the ceiling might be?!


We can't wait to see just how high players are able to push their Raid Level over the coming weeks!


Now that people are starting to get a little more comfortable within the raid, we'd like to challenge you to go faster.


Simply pick one of the four routes, clear the path, defeat the boss at the end and submit a clear video of the whole thing to us – no extra prizes for filming on Unregistered Hypercam 2. The fastest team for each of the four races will receive two months of Membership for everyone in the group!


We’ll say it again: you must have a recorded video of your speedrun for it to be eligible for the competition. To submit your entry, simply fill out this form, including a link to the video.


T&Cs for the competition can be found here. Good luck!


We'd like to take a moment to thank everybody who's gotten stuck into the Tombs of Amascut over the past week.


The team has absolutely loved watching you take on the various bosses, and we really appreciate all the feedback you've given us so far!


If you've not had a chance to try Tombs of Amascut yet, complete Beneath Cursed Sands and give it a go! Entry Mode is very accessible, so get some friends together and get tomb raiding.


Don’t worry, we haven’t forgotten about the rest of the game! Here are the other patch notes from this week:


The PvP Arena is now using 'Pure' loadouts in Ranked Tournaments this week.

That about wraps it up for this week!


As always, make sure to get in touch with us using the links at the bottom of the post if you have any thoughts, feedback or further issues to report with Tombs of Amascut.


Thanks for reading and happy raiding!


Discuss this update on our official forums, on the 2007Scape subreddit, the Steam forums, or the community-led OSRS Discord in the #gameupdate channel. For more info on the above content, check out the official Old School Wiki.