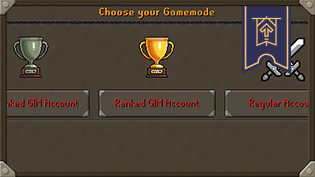 We’re launching a bunch of improvements to Group Ironman Mode! 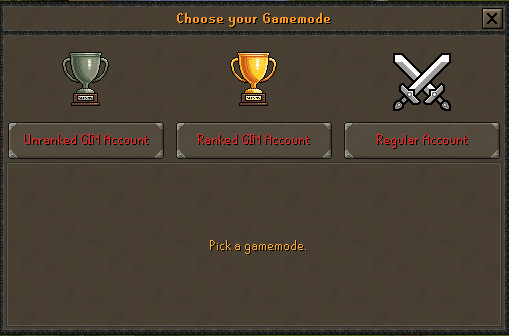 This week we’re following up on the promise we made in here – making Group Ironman more chill for you and your mates!


Unranked Group Ironman (or UGIM) is a sub-category of Group Ironman. It allows you to invite and accept group invitations from other UGIM and grants greater flexibility when swapping between teams.


Should you find yourself wanting to join a new group on an existing GIM account, or hoping to invite a new player to your group, you can now seamlessly convert your GIM status to ‘Unranked’.


In return for this additional flexibility, Unranked Group Ironman groups are removed from the GIM HiScores – although you’ll all appear individually on the regular ones!


Be warned: once this change is made, you will not be able to revert your account back to Ranked Group Ironman. It’s a one-way street!


So, under these new rules…


A group that invites an experienced player will:

If you're looking to form a new unranked group:

If you leave an existing group, you may also choose to adopt Unranked status:

There are no trade restrictions or killcount requirements for Unranked groups.


We'll give you sufficient warnings if you're about to join an Unranked group, or if your group is about to become one. Keep an eye out for these if you decide to invite new players in!


We ran a player survey to gather your feedback on the above changes. Let’s address your main concerns:


Trading untradeable items between GIM members proved to be a very popular quality of life update.


We’ve discussed how to make this happen and what potential issues could arise if we did enact this rule.


One big consideration was that allowing GIM players to trade powerful items like the Bow of Faerdhinen could make it more convenient to be a GIM than a regular player. Is that healthy for the game?


We also considered whether we could replicate this behaviour on main accounts, and how that might work. Untradeable items are not available on the Grand Exchange and we can’t display charge status in the Trade screen, so this change would make scamming much more prevalent. We’d have to undertake considerable work to fix this.


In addition, making certain items with quest requirements tradeable presents issues with the system we use to run checks on items. We’d have to rework our whole system to accommodate the change.


We also thought about the implications for PvP players. Existing untradeable items could be disproportionately strong in this framework, seriously affecting PK metas. Is that fair?


Lastly, we had to consider the potential future development costs. We’d have to carefully consider every new item in the game to decide whether it should be untradeable but tradeable for GIM, just tradeable, or just untradeable. Over time, that adds to our development hours.


We really want to improve quality of life where we can – but hopefully you can see that the team has some serious reservations about this particular change. We can’t treat it like any other QoL update – we need to put a great deal of thought and planning into making it work. We’ve tried a couple of solutions with ‘lower-value’ items already, and while we can see why this update is so desired, the potential ramifications are too much to handle just yet.


However, we may revisit this concept in the future, when we have a clearer idea of how to resolve the issues inherent in its design.


HiScores requests are naturally a lot of work, as they involve multiple teams and are often more technically complex than they seem on the surface.


However, with today’s update, Group Prestige should now be visible on the HiScores, where you’ll also be able to see if a hardcore group has run out of lives. Please note, this won't take effect until players have logged in.


Prestiged groups are marked with a star on the HiScores. Losing Prestige by any means will make the star disappear.


Group KC is another popular HiScores request. Unfortunately, it’s too complicated for us to tackle right now. We’ve explored our ‘hackier’ options, and there’s just no way to do it without relying on engine work – a much bigger undertaking than it seems! Unless significant progress is made, we’ll be setting this one aside for the foreseeable.


We understand that some players would like their UGIM status to be represented with a different icon. We didn’t offer this in our original plan in case it left UGIM feeling alienated – but we can apply it retroactively, and it’s likely to happen soon. We think it’s important to ensure that GIM can show off their achievements and status appropriately.


You also asked us to consider allowing regular Ironmen to become Unranked Group Ironmen. We generally feel this is acceptable, because GIM is an easier approach to the Ironman experience. We’ll be working on this option in the coming weeks. Please note that this decision, when implemented, will be irreversible – we will never allow UGIM to convert to regular Ironman.


Now, ready to win some prizes? Welcome to our first-ever Group Boss Bash!


This two-week competition is especially for Group Ironmen and begins today on May 26th. Gather your buddies, take down various bosses, and earn raffle tickets that’ll help you win awesome prizes.


Take a look at the table below to see which activities will net you those tickets, and whether they’ll apply to everyone in the group or just individual players:

These tickets have no in-game value, cannot be traded, and are only available for the duration of the raffle.


Two weeks from now we’ll randomly choose 10 lucky groups and award them with Membership! As it’s a raffle, the more points you accumulate, the more likely you are to win – so get bashing those bosses!


Signing Up for the Raffle


In order to participate, you'll need to register your group for the challenge.


GIM will now see a new interface on the GIM settings menu which shows information about raffles. If you don’t feel like joining in, the ‘leave’ button will exempt your group from the draw and prevent them from joining it again.


Please note that we’ll need to temporarily disable certain group features, such as leaving a group and changing the group name, during the raffle. If you want to re-enable these features, you’ll need to leave early!


Additionally, you may only register for this raffle once per group, so make sure that the team you register is the one you intend to stick with!


You'll accumulate points on your account that are visible from your UI. After the 2-week raffle, we'll pick 10 winning groups!


We'll contact winners in-game to arrange prize giving and ensure the membership they've won is applied to their desired account. Unless otherwise specified by the winners, we’ll apply the membership to the account used to register in the raffle.


A summary of the Group Boss Bash Terms and Conditions can be found here.


The full Group Boss Bash Terms and Conditions can be found here.

Guardians of the Rift Improvements


We’ve heard some of you say that the most frustrating element of Guardians of the Rift is getting into the minigame! Obviously we don’t want that to be the case, so with today’s game update we’re increasing the player cap per game to 200. The Great Guardian’s HP will scale appropriately.


We’ve also allowed players to lock their game and prevent other players from entering mid-way through the fight: perfect for small groups who want to play together! If that sounds like your thing, have a word with Tamara to sort it out. After you’ve enabled this option once, you’ll be able to use a right-click quick option to do it faster.

The endgame will now be delayed when the Great Guardian reaches 100% power. He is unable to take damage during this time. This change allows players to access altars and hand in their Guardian Stones before the game ends.

Finally, barriers now display their HP bars at all times, unless they’re at full HP. The HP bars are now half the size, and the ‘Inspect’ option has been removed.