Welcome to this week in RuneScape! It’s all kicking off on Anachronia as the Varrock Museum (and their crew of archaeologically inclined adventurers) digs into Orthen. We’ve also got the usual grab-bag of Patch Notes and the fabulous Community Corner, where you can peek behind the scenes of this week’s update.

We're heading back to the island this week with all the details about Orthen, our latest Dig Site! In other news, we've got reminders about the Archaeology XP Embargo, Steam, and Prime Gaming, plus a sneaky little accessibility update from last week. Let's get right into it, shall we?

Ready for an island adventure? We hope so, because Archaeology's sixth dig site, Orthen, is open today, and it's on the most adventure-packed island of all!

You can begin your journey into Orthen's past by speaking to Mr Mordaut at the Anachronia Base Camp.

You'll need level 90 Archaeology to start work on the first excavation spot. Completion of 'Desperate Times' and 'Desperate Measures' is not required but will be helpful for some of the later puzzles.

The dragonkin were brilliant inventors, and the ruins of Orthen are home to all kinds of bizarre and powerful objects – including the following Relics!

This Fishing skill relic draws on Evil Bob's dread powers to cook fish as they are caught, with no chance to burn them. You'll also get 50% of each fish's base Cooking XP.

Obviously, this miracle only works on fish that have a cooked variant. Any and all Cooking XP boosters apply, including Bonus XP and Signs of the Porter. The Relic also works in Daemonheim.

Hey, you know what? We wonder what might happen if you tried to use Evil Bob's Catspaw in ScapeRune…

The dragonkin's top scientists were responsible for brewing up this tasty potion that allows the drinker to enter a Flow State, increasing their Archaeology Precision by +20%. What's the downside, you ask? While in the Flow State, you'll have no patience for sifting through random bits of dirt and rubble, so you won't receive any soil.

With Kaladanda, the legendary 'Death Note' in hand, all bone and ash drops from combat will be noted automatically.

Items such as the Bonecrusher, Attuned Ectoplasmator and Prayer urns will take priority when it comes to bones and certain types of ashes. Anything left after their respective effects have triggered will be noted.

We expect that this Relic will be most helpful for training Slayer and Prayer, so bring it along if you'd like everything to go according to plan.

Rumour also has it that somewhere in Orthen lies the secret to increasing the Monolith's power, so keep your eyes peeled!

Soma wasn't the only thing the dragonkin scientists were brewing up down in their laboratory – they also mastered several never-before-seen potions. For the first time in thousands of years, high-level herblorists will be able to brew the following:

The mother of all combat potions combines an Overload, Aggression Potion and Prayer Renewal Potion into one easy flask. Spicy!

To brew a Holy Aggroverload you'll need 98 Herblore and one of the following sets of ingredients:

To brew a Summoning Renewal Potion you'll need 88 Herblore and the following ingredients:

Now that the XP embargo's over, you're free to use this nifty little potion to boost your Archaeology skill by three whole levels!

To brew an Archaeology Potion you'll need 78 Herblore and the following ingredients:

To brew one, you'll need 103 Herblore and the following ingredients:

Powerburst of Opportunity can also be improved!

While active, this friendly potion will automatically pick up spirits in your general area, including Seren Spirits, Chronicles, Blessings of the Gods and Fire Spirits. Brr… spooky!

To brew a Spirit Attraction Potion you'll need 116 Herblore and the following ingredients:

Of course, you'll need to find the recipes before you can start messing around with potions. Keep searching through Orthen's ruins to find them all!

Yes, you heard us right! RuneScape's first two skilling off-hands will be bundled up as part of the Orthen update. You'll need a hefty amount of materials and some serious skills to make them, but we think that you'll agree that the buffs they provide are well worth the effort.

Things are heating up now! This offhand item won't just keep your hands toasty in the winter months, it'll also give you bonuses to Smithing and Firemaking.

It'll become available at level 102 Archaeology, and you'll need 99 Smithing and 5 Firemaking to keep it from being too hot to handle.

This nifty device will help you out while you're training Crafting or Construction. It becomes available at level 102 Archaeology, but you'll need 99 Crafting to wield it.

As you may remember from the announcement post Orthen also contains a perfectly paleontological repeatable event that'll have archaeologists of all stripes banding together to get some sweet buffs.

While excavating any of the spots in Anachronia, you'll have the chance to find skeletal fragments, which you can contribute to the exhibit back at the Base Camp. We won't spoil what happens when you put them all together, but rest assured, you'll see some ROARsome rewards.

Firstly, you'll get a 25% XP boost to all the following Anachronian activities:

The same buff will also provide a small boost to drop rates for the following activities and items found in Anachronia:

Ready to delve into the lost city of the dragonkin? Then what are you hanging around here for? Log in and speak to Mr Mordaut at the Base Camp!

In case you missed it above, we just want to make sure you're aware that the Archaeology Embargo on Bonus XP has lifted today.

Basically, that means that as of right now you can start using all kinds of XP buffs to get ahead in Archaeology. That includes Bonus XP, Vic the Trader, lamps, and everything else you can imagine!

Itching to start buffing your Archaeology gains? Then look no further than Digsite Delve, a new Treasure Hunter promotion packed with archaeological finds.

Prizes include such illustrious items as the Restored Artefact Replicator, the Dwarven Archaeology Tool and Fixate Recharge tokens – and if you're looking to top up your Bonus XP, there are plenty of supreme stars to go around too.

Digsite Delve will be the main Treasure Hunter promotion between October 20th to October 26th.

This cheeky update slipped under the radar last week, but a few keen-eyed players have spotted it!

For the rest of you, here's an official announcement: it is now possible to adjust the font size of your Chat window. To do so, head to the Gameplay Settings menu, then navigate to the Chat Customisation options.

Feel that? That's your eyeballs taking a well-earned rest. Enjoy!

Don't forget, you can now play RuneScape via Steam!

When you do so, you'll get access to all kinds of steamy stuff, including Trading Cards, Achievements and more! Go on, connect your accounts and give it a whirl!

Oh, and remember that when you log in on any platform between now and November 14th, you'll get a free Steam Valve goody bag to celebrate this momentous occasion in RuneScape history. Anyone with at least 100 total level who's completed the Burthorpe Path is eligible!

Here's another reminder: until November 10th, you can claim a Currency Pack and two Umbral Chests from our friends at Prime Gaming. Each chest contains a super-rare prize or better, so they're well worth getting your hands on!

To do so, simply follow the instructions on this page. Enjoy your gifts!

Welcome to the Community Tab! Here, have a cupcake. This week we’re settling in for a behind-the-scenes look at Orthen, rallying for a Kalphite King boss mass, and flexing our art appreciation muscles with some fantastic art. Ready? Then let’s go!

Orthen has been released! We'll be answering your questions and giving you an introduction to RuneScape's newest digsite - and a cheeky first-look at this year's Halloween event

Our tenacious time-travelling tutorial team are taking a trip to Troll Warzone this week, where they'll be reminiscing on the creation of one of RuneScape's most iconic tutorials. Don't miss out!

Our featured streamers this week are Agita Sage and ChunksOfPlum! The dynamic duo will be taking part in a blindfolded PvM challenge, which sounds pretty exciting to us! They'll also be doing some community bossing and a few clues.

Tune in this Saturday, October 24th and 17:00 Game Time on Agita and Plum's Twitch channel.

Peer Pressure is the Worst 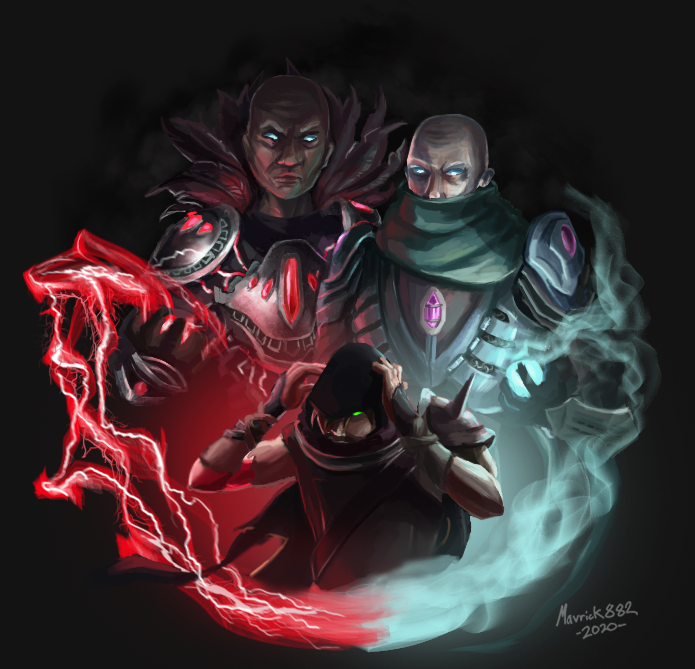 Gielinor's baldest baddies have gathered in this fantastic piece of art by Mavrick882. We've all had to try cutting our hair during lockdown, so the urge to just shave it all off is extremely relatable right now. Great job!

This week's featured Pink Skirts event is the Kalphite King boss mass, hosted by Sharna, Nobleartisan and Philly PD (we're pretty sure the desert is out of their jurisdiction, but what do we know?).

To join the battle, head to the Kalphite Hive on World 68 this Tuesday October 20th at 23:00. Don't forget your rope!

For more details, check out the Pink Skirts page.