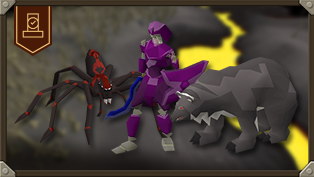 This is a quick follow-up blog focusing on Revenant weapons, following the Wilderness Boss Rework Poll!

A brief update before you vote!


When this blog first did the rounds, it seemed like you were pretty happy with how things were shaping up ahead of polling. Great!


There was one major suggestion we saw crop up a handful of times that we wanted to address to make sure you know we've seen it.


Increasing the number of Revenants assigned on Wilderness Slayer Tasks


For those not in the know, let's give a little context here. This all stems from Poll Question #1 and conversations around Wilderness Slayer.


Most of you probably already know this but Slayer tasks are assigned pseudo-randomly, where each possible task has a different 'weighting' from a particular Slayer Master. Your odds of receiving a given Slayer task is that task's weighting, divided by the total weight of all available tasks (i.e. all the tasks you're able to be assigned and that you haven't got on your block list).


Krystilia has a total task weight of 196. Of this total, 56 comes from Boss tasks that are only available to players who have unlocked Like a boss for 200 points at a Slayer Master. We'll remove these 56 and work with a total weight of 140 for convenience's sake.


Revenants have a weight of 5. Meaning you'll likely see one revenants task per 28 total tasks (140 divided by 5 is 28). On top of this, Revenants are assigned in pretty low quantities between 40 and 100.


As a result, some of you felt that increasing the on-task drop rate of Revenant Weapons might not change a whole lot about how obtainable they are, and suggested adjustments to the task itself to offset this.


To make things clear: we're absolutely on-board to make adjustments to Revenants tasks. Whether that's a Slayer Point unlock to extend tasks, a Wilderness Diary reward of some kind, an adjustment to the task weighting or some combination of any of the above.


However at this time we'd like to see where the weapons sit after any changes that come to pass from the currently offered questions. If you're in the loop and read the section at the top of Poll 77 you might already be aware of our intention to start theming various polls around different sections of the game.


Something like this would be a prime candidate for such polls, one that we'd be very open to exploring if the Revenant weapons are still missing the mark at all.


These questions are due to be polled live in-game starting Wednesday, November 16th, alongside the proposed rewards from a mysterious new boss (more info on that here).


In the meantime, thank you for taking the time to read and providing us with your feedback. We're hoping to put the reworked Wilderness Bosses in front of you before 2022 is done and we can't wait to see you all get stuck in!

If you haven't been living inside of a cave full of ghosts for the last couple of months, you've probably seen the Wilderness Boss Rework Poll Blog and subsequent poll outcomes.


This blog's focus is on Questions 10 and 11 from the poll, covering some of the ways we can deliver on your desire to make Craw's Bow, Viggora's Chainmace, and Thammaron's Sceptre more obtainable.


We've chosen the most popular outcomes to expand on in this blog.


Let's start with the most popular choice: increasing the drop rates of Revenant weapons while on a Revenants Wilderness Slayer task.


Task-specific drop rate increases are something we've done before, namely with the Basilisk Jaw from Basilisk Knights, as well as various uniques from Wyrms, Drakes and Hydras.


Typically, this task-only drop rate increase has been a 5x multiplier. At time of writing, the combined prices of Revenant weapons account for a little over 1.5% of the drop value of Revenants. With this in mind, we're confident that offering the same on-task drop rate increase here won't balloon their profitability and incentivise players to only kill Revenants on-task.


Should Craw's Bow, Viggora's Chainmace and Thammaron's Sceptre be dropped 5x more frequently by Revenants when on a Revenants Slayer task?


The second most popular option was 'Drop rate increases above 20%'. For some additional context here, the first iteration of the Wilderness Boss Rework Poll Blog offered a question around increasing the drop rates of Revenant weapons by 5%, 10%, 15% or 20%.


Many players voiced that even with a 20% increase, it wouldn't move the needle significantly. So we've put together this nifty table showing how drop rates would be impacted by increases ranging from 20% to 50%.


We'll offer a variety of percentages, but be keeping a close eye out for feedback in case players feel the mark is still being missed (in either direction).


The table shows the drop rate of any specific Revenant weapon (i.e. Craw's Bow, Viggora's Chainmace or Thammaron's Sceptre) from each Revenant NPC while unskulled and skulled. In bold we've included what these drop-rates would be on-task if Poll Question #1 passes.

Another popular option was for the reworked Wilderness Bosses to have a chance at dropping their respective Revenant weapons themselves, at a more common rate than the new attachments.


We've given this some thought and think we have a slightly more elegant solution than just popping weapons on their respective drop tables.


Instead, we'd like to propose a 'Revenant table' for the reworked bosses, a little similar to Corporeal Beast's Sigil table. Upon killing a boss, the player would have a chance to roll onto this table. The table itself would contain the weapon attachment corresponding to the boss as well as the base weapons, weighted towards whichever weapon the attachment is aimed at.


If that sounds confusing, here's an example of what that table might look like for Venenatis, with wholly arbitrary example numbers.


For example, if the player's odds of hitting this drop table are a 1/100 (again, this number is totally random and solely for demonstration!) then the actual rates of each of these items from Venenatis would look like this:


This means the base Revenant weapon would always enter the game at a slightly higher rate than the attachment, since their rate per boss is identical and the other bosses have a slight chance at dropping the other weapons too.


The final popular option from the previous poll was Skotizo-style totem system, where Revenants would drop pieces of a totem, giving players access to a boss when assembled. The boss would have improved drop rates for the Revenant weapons.


Unfortunately, the scope of a project like this isn't something we'd be able to offer alongside the Wilderness Boss Rework. That being said, if your feedback is overwhelmingly in support of a system like this, it's something we could offer in the future as an extension to the Revenants.


With all of the above in mind, let's wrap up with the final questions of this mini-poll!


Which of these methods would you like to see as a way to make Revenant weapons (Craw's Bow, Viggora's Chainmace and Thammmaron's Sceptre) more obtainable? The highest-voted option will win.


Increase the base drop rates of Revenant weapons, by an amount to be determined by the outcome of Poll Question #3. This would stack with the Wilderness Slayer task buff if Poll Question #1 passes.


Include a 'Revenant table' on the reworked Wilderness bosses. When rolling for drops, if players roll onto this 'Revenant' table they'd have an equal chance at receiving the new weapon attachment or its associated base weapon and a lower chance of receiving a different base weapon.


If the base drop rates of Revenant weapons are to be improved, how much should they be improved by? The highest-voted option will win.

That about wraps it up for this one!


We'll be looking at your feedback across all the usual channels and making any adjustments we feel necessary ahead of polling. There's plenty of time as there is currently a poll in progress for two new quests, a brand-new repeatable solo boss and a Combat Achievement expansion so go ahead and vote on them already!


Be sure to let us know what you think about the proposed changes in this blog by following one of the links below!