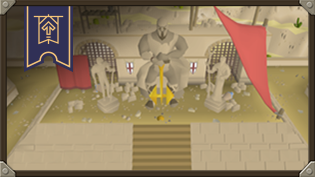 This week's update brings the full launch of the Emir's Arena, read on to see what we've changed and for our thoughts on some of your feedback!


Last week, the Emir's Arena (A.K.A. the PvP Arena) opened its gates to adventurers for the first time! It’s been great watching you all get stuck into duels and tournaments of all kinds – and even running a few of your own!


One of the major selling points of the Emir's Arena is the ability for players to find fights from anywhere, at any time and in any world. The technology put in place to make this feature work is constructed from the new Clan system we introduced last year - its cross-world functionality may be very limited, but it's still brought us this new method of recruiting players for activities. We hope to be able to extend it to more multiplayer content in future.


The primary function of the 'soft launch' was to make sure that these new and complicated systems were working as intended while under the strain of thousands of players using them at the same time. While there are some tweaks we need to make following your feedback - more on that in a moment - it's safe to say that the matchmaking and other core systems are working fantastically!


So, without further ado, we declare the Emir’s Arena… open! Someone pop a bottle of Sq’irk Juice.


If you want to get all of the details about the Arena and how it works, make sure to check out last week's newspost or if you missed it, catch-up with last week's livestream below!

For now though, let’s take a look at the early changes we’ve made based on your feedback.

This week's update also sees the inclusion of players' PvP Arena rank on the HiScores, so you'll be able to see exactly how you stack up against your fellow combatants!


Players will have to log in and out of standard game worlds in order to update their rank on the HiScores, since the PvP Arena worlds aren't able to directly communicate with our HiScores.


It's worth noting that any developers making use of the HiScores API will need to update their scripts following today, apologies for any inconvenience.


Remember – now that the PvP Arena is officially open for business, players’ Rank and Reward Points from the soft launch will be reset. On the flip side, the Emir’s finest merchants are done counting their stock, and as of today’s update, you’ll be able to spend your hard-earned Reward Points on Imbue Scrolls and Blighted Sacks from the Rewards Shop at the Arena entrance. 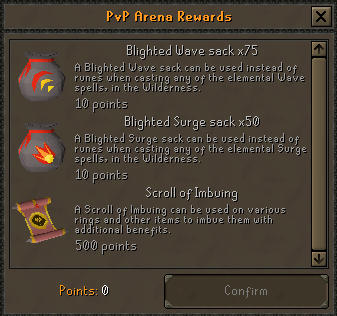 Lastly, we want to reiterate some of the points we spoke about in this week’s Q&A for anyone who missed it (you can check it out for yourself here!) Read on for some more details!


This week’s livestream has moved to Monday 18th July at 17:00 BST! We’ll be joined by PvP creators for another round table stream to discuss various topics within the PvP community! Next week’s Thursday slot should go ahead as normal.


We've received a lot of suggestions over the last week, and while some of the quick fixes have already been implemented, it’ll take us a little more time to develop the bigger changes you requested – and some are out of scope entirely.


Here’s what we reckon we’ll be able to offer in the near future.


First off, a lot of you expressed frustration at the Arena’s Spellbook, which contains all the combat spells. A lot of high-level players (especially those who perform switches with items at the top of their Inventory) make use of Spellbook filtering to reduce their mouse movement in-game, and have those movements embedded in their muscle memory.


We’ve begun work on a change that should allow players to control exactly which Runes their Rune Pouch contains and to display which spells are enabled so that players can get back to focussing on the game instead of unlearning years of practice! We should be able to deliver this change before the end of July.


Feedback also indicated that you lot want a way to copy your opponent’s loadout or save various presets within the same combat bracket.


While multiple presets are a bit far out of reach just now, we’re working on a ‘Copy’ option which will let you quickly copy your opponent’s gear when you want a mirror matchup. We hope to put this in the hands of players within the next couple of weeks!


We’ve also seen a number of requests to remove certain items or cap the permitted quantity of supplies (namely food) from the Equipment Chest for being too powerful. You’ll notice that we’ve already removed the Ancient Godsword and the Ring of Suffering (i), and we’re open to further suggestions.


The Bow of Faerdhinen is another item we’re keeping an eye on, although we hope the inclusion of the Zaryte Crossbow this week will help balance things out a little.


Many of you have expressed concern that NH (No Honour) is the prevalent combat style in the Arena. NH is one of the toughest PvP styles to get to grips with, and many of you have asked for greater support for more beginner-friendly options.


While lots of you have been organising unranked duels and tournaments using simpler setups like Edge-style PvP, it’s rare to see these in ranked play and they are therefore harder for players to queue up for.


Right now, we can’t promise a permanent ladder where alternative styles can flourish. If we introduce these alternatives as separate queues, we'll be spreading player numbers thin and this could have knock-on effects for the speed of matchmaking.


We may be able to offer them in a different way, such as by changing which builds appear in the weekly build rota.


We can, however, explore seasonal ladders which run for a limited period of time and focus on restricted builds. We think this would encourage more beginner-friendly setups. Bear in mind that if we can offer this option, it will take us some time to figure out – but we’ll keep you posted on all the latest news!


We're also aware that while Steel-ranked players are able to find fights quickly, players in Mithril- or Iron-rank are having lengthier wait times for suitable opponents. We'll be keeping an eye on this as the rank distributions change over time so that we're able to fine-tune our matchmaking system.


Speaking of updates, rest assured that we’ll be informing you of any further changes we make, or are planning to make, to the PvP Arena. We’re constantly on the lookout for feedback, so be sure to share your thoughts on the usual channels. Let’s work together to make the Emir’s Arena the best it can be!


Beyond the PvP Arena, we've also made a few other changes around Gielinor this week!


Last month, alongside the release of Giants' Foundry, we announced a Weapon Design Competition, asking YOU to create weapons fit for giants!


After much deliberation, the team has decided on our winners. Extra-big congratulations to the following: 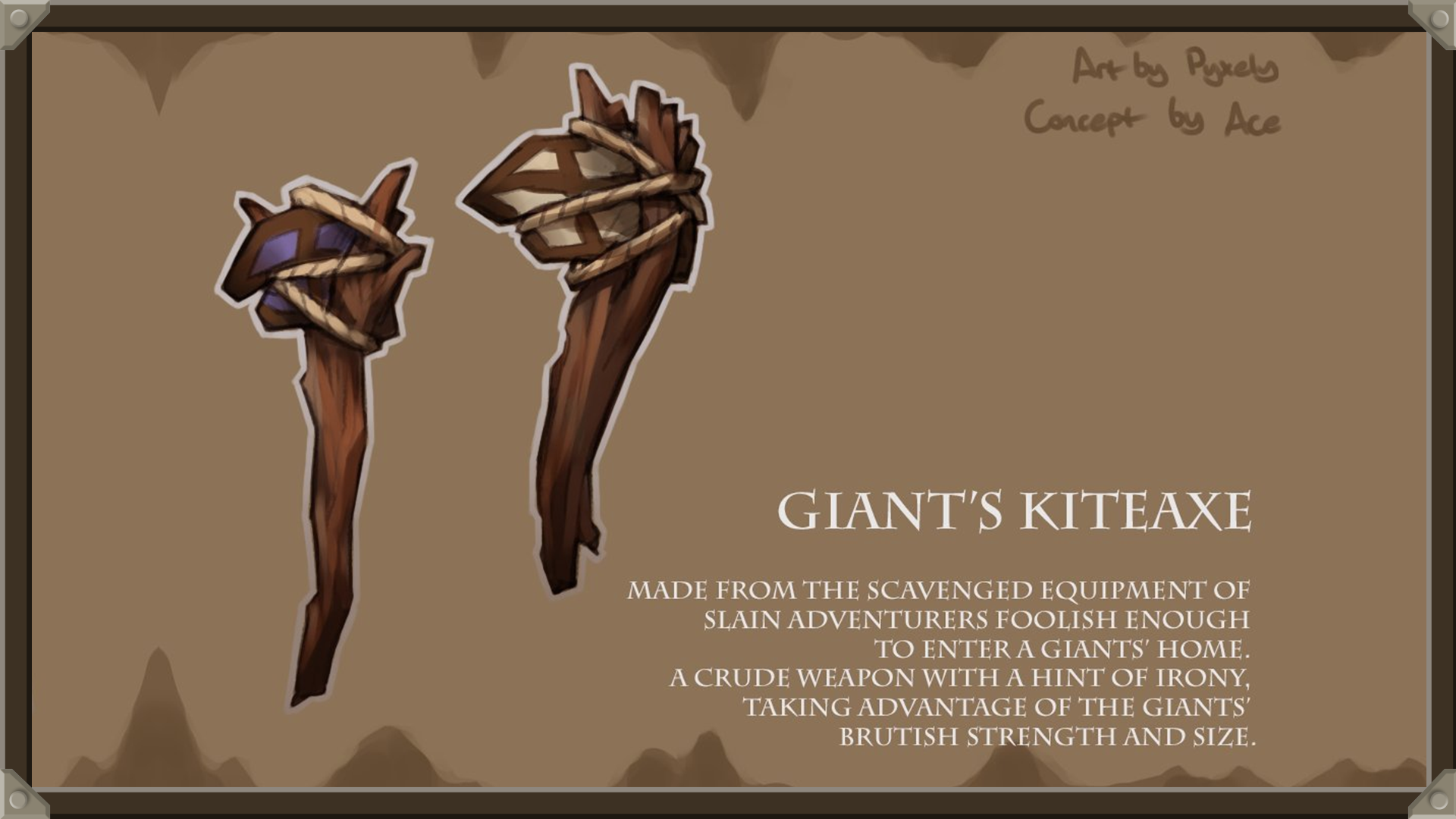 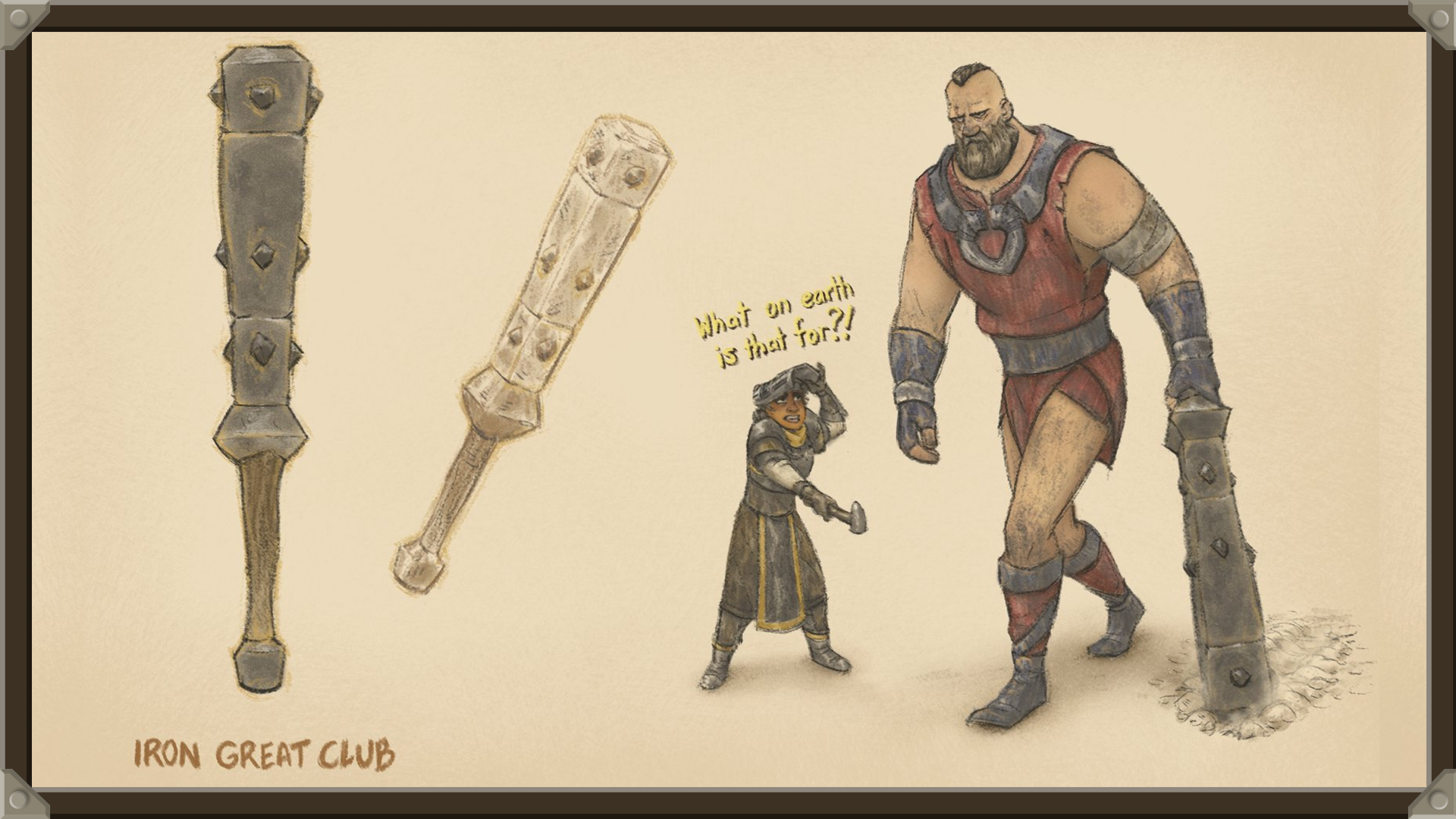 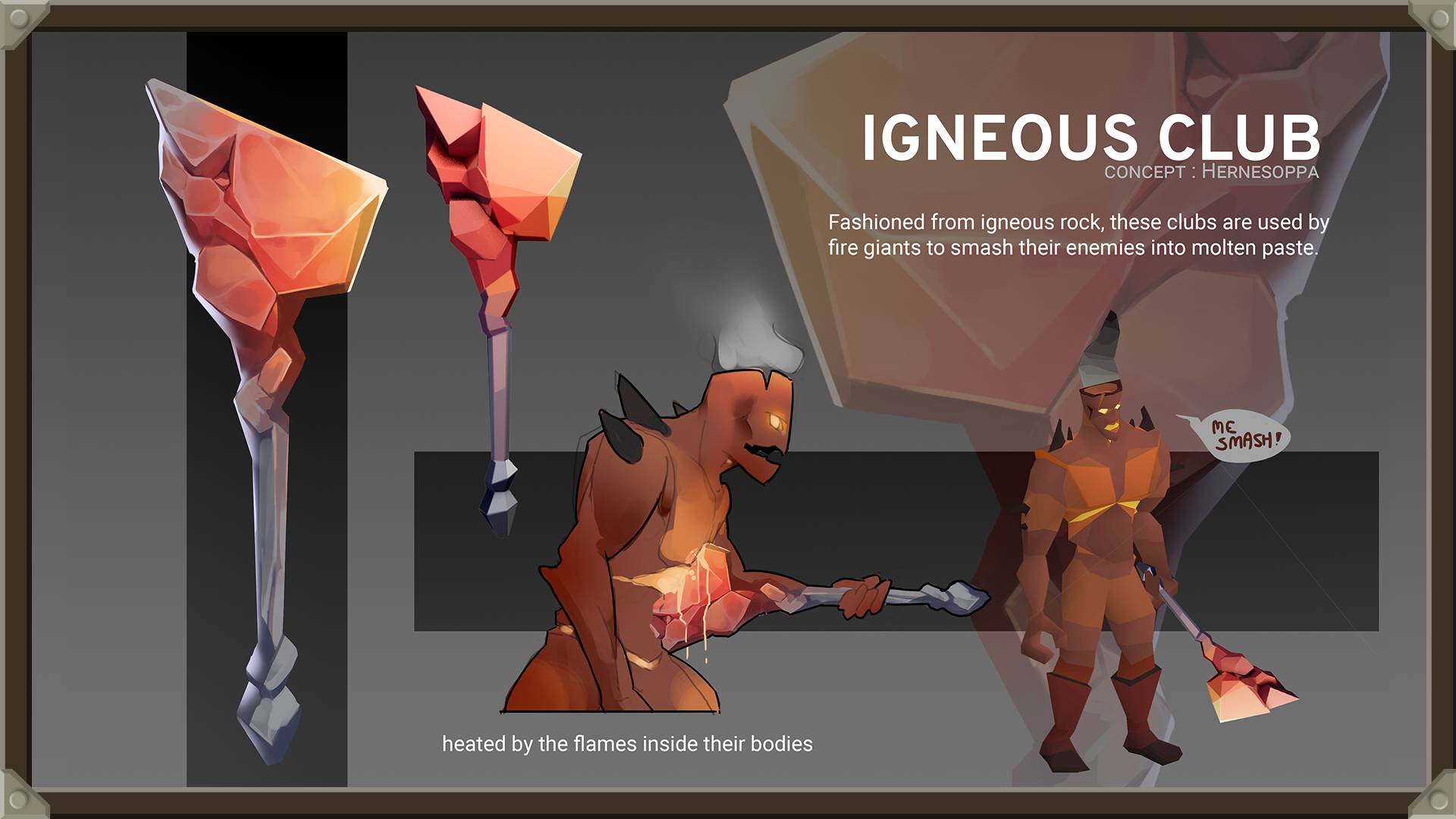 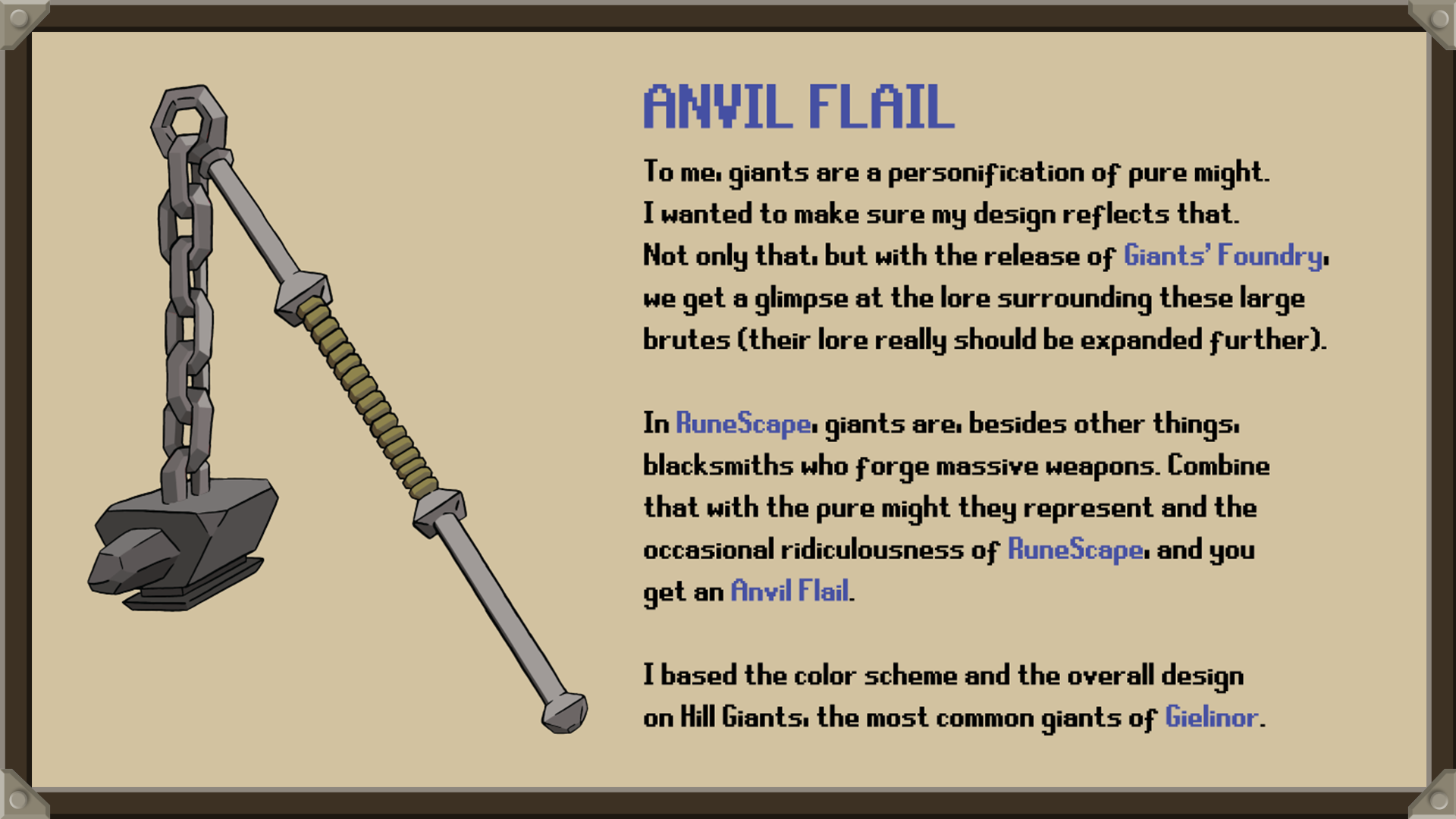 
We’ll be contacting the winners this week, so keep an eye on your player inbox for more details about your prize! Huge (gargantuan, even) thanks to everyone who submitted a design. We hope to feature some of the runners-up on a livestream in the near future!

Discuss this update on our official forums, on the 2007Scape subreddit, the Steam forums, or the community-led OSRS Discord in the#gameupdatechannel. For reference on the above content, check out the official Old School Wiki.