We're letting off some Steam this week and clearly, so are the Ninja Team - 'cause there's been another Ninja Strike! Get clued into that in the Game News tab. Elsewhere, we've got pop art, a nice pile of Patch Notes to sort through and another player-run community event for you to enjoy.

This week's update is all about Clue Scrolls! We've also got a reminder about RuneScape on Steam, some exciting freebies and some great news about Interface Scaling. So, grab your magnifying glass, and let's take a look!

Wishlists at the ready, folks. You'll be able to play RuneScape via Steam this Wednesday, October 14th. Exciting stuff!

To celebrate the launch, weĺre giving experienced players a special goody bag! If you've completed the Burthorpe Path and got yourself a total level of 100 or more, simply log in on any platform between October 14th and November 14tháto claim the Steam Valve, filled with all sorts of surprises to mark this historic moment - including a Commemorative Steam Valve of your very own!

You can find our shiny Steam page right here. Add RuneScape to your Wishlist and you'll be among the first to know when we go live. See you there, adventurers!

This week the Ninjas have donned their deerstalker hats, teamed up with Mod Daze and set to work on one of RuneScape's greatest mysteries - Clue Scrolls!

Firstly, the Ninjas have dug up five new titles for intrepid treasure hunters to enjoy. You can unlock them for yourself by obtaining various drops from each tier of the Treasure Trails Collection Log - and there are even a few hidden gold titles for those super-sleuths who go above and beyond. Big thanks to Mod Daze for this one!

Against all odds, somebody has already earned the hard tier collection title! Congratulations, John Skynyrd!

Friends of the cave goblins will be plenty familiar with these funny little inventions, although they might not be so impressed with the way they drop you off in random bits of Dorgesh-Kaan. Well, this week the Ninjas paid a visit to Oldak and straightened out a few kinks in the blueprints - so from now on they'll be a lot more reliable.

You're now be able to choose where you teleport to in Dorgesh-Kaan instead of having your destination chosen randomly. Much better!

The monks in Entrana have recently been embroiled in a mighty philosophical quandary. According to their ancient laws, Summoning familiars are classed as deadly weapons, and that includes... meerkats.

Yes, those squeaky lil' fellas have been banned from Entrana's shores since their introduction to the game, but thanks to the Ninja Team's intervention, they are now allowed on the island to sniff out clues to their hearts' content, along with all other Summoning familiars, pouches, and other paraphernalia. No word yet on how many innocent monks have been mauled to death in the process.

Ah, here we go! Zaida's Treasure Trail Reward Shop has just received a cache of new and exciting goodies. These include the Clue Capacity Upgrade, which will let you hold 50 clues of each tier instead of 25. You can also unlock the Way of the Foot Shaped Key, a leg-end-ary technique used by the Ninjas to open drawers and chests without a key. Now, for just 500 Treasure Trail points, you too can learn this ancient art!

Here's a little surprise for you all! From October 26th, we'll be making the four additional Action Bars previously purchasable through Solomon's General Store free, forever, for both RuneScape members and free to play players!

We've seen how helpful it is to have a wide variety of preset Action Bars available, and we hope providing this expanded range of customisation for free will be a simple but effective quality of life boost that's now available to everyone.

This is also just a small part of our ongoing commitment to examine our premium offerings in RuneScape across the board to make sure we're providing great value in the right places. The full changeover is going to take a little while to implement, so we wanted to give you a heads up as soon as possible on this impending change.

Please note that the Action Bars will remain available in Solomon's General Store until the changeover on October 26th.

As part of our goals of improving the accessibility and readability of RuneScape, weĺve been building on the existing interface workáyou heard about earlieráto make even more improvements!

First up is in-game UI scaling, which will increase the usability of interfaces throughout the game to suit your setup. In the future, based on your feedback from the Beta, we also are looking to update this feature to scale the UI downwards too!

Additionally, weĺve also added the option to boost or reduce the gamesĺ render scale. Lowering it will reduce visual quality to improve performance and raising it will do the opposite.

It's your last chance to claim your Prime Gaming reward from last month. In case you've forgotten, that's a whole seven days of free membership you're missing out on!

This also means that tomorrow, on October 13th, there'll be an exciting new reward up for grabs. This time, you can get a Currency Pack and 2 Umbral Chests, each with a super-rare or better prize inside!

To get yours, follow the instructions on this page.

We know you're itching to learn more about Archaeology's latest dig site - that's why we're running another livestream this Tuesday, October 13th, that promises to dig even further into Orthen's mysteries!

Don't forget to catch up on the Orthen announcement blog!

Ah, so you've come for the ancient scrolls? The dark tomes of knowledge guarded for eons by generations of Ninja Teams... the 'Patch Notes'.

Yes, if you're looking for all the nitty-gritty details from this week's Ninja Strike, then you've come to the right place!

Note: There is a known issue at high scale percentages where the 3D game world is also scaling, and when scaling down, there is a brief but noticeable graphical error. Weĺll be working to iron out these problems and add more features over the next few months.

In this week's community tab, we're digging even deeper into Orthen, celebrating our Steam launch, and getting into the party spirit with a player-run community event!

To fully understand the mysteries of the lost city of the dragonkin, we have to go deeper... so that's just what we're going to do in this very special preview livestream!

It's HAPPENING! For the first time ever we'll be streaming live on Steam to introduce our new adventurers to the world of RuneScape. Come join in the fun and give them a big RuneScape welcome!

You can catch all our livestreams over at https://www.twitch.tv/runescape

Our featured streamer this week is WeeklyKiwi, who'll be engaging in some solo bossing followed by some group PvM! Depending the whims of you, the audience, might also get around to some beginner PvM runs - so if that sounds like your thing, be sure to join in the action on Monday 12th at 23.00 Game Time on WeeklyKiwi's Twitch channel.

Andy Warhol's got nothin' on this fabulous pop-art piece from Discord user ACPL. We love how you've captured Seren's expression (those are eyes, right?) and, of course, we LOVE the colours! 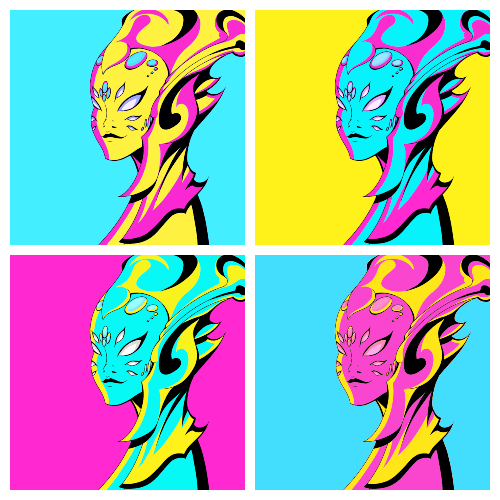 Why You Should Play Runescape - A New Game For Steam

Now, we hope that we've convinced you already, but if you're still on the fence, Laser Shark's latest video is all about why you should give RuneScape a go on Steam! He's stretching the definition of 'easiest quest' quite a bit, but the facts are solid, and it's great to see our community welcoming new players to the game.

Back in July we encouraged everyone with an idea for a community-run event to come forward, and this week, we're rallying for Spirit Day! For those of you who are unaware, Spirit Day is a holiday by GLAAD, and itĺs all about uniting to stand up against bullying.áYou can read more about it (and wing a donation their way) right here!

The Diversity RS Discord and ScardyGinge are hosting an in-game event to celebrate, and if you want to join in the fun, don your most purple-y fashionscape at the Well of Goodwill on W25 at 19:00 Game Time this Thursday, October 15th. Thereĺll be skillinĺ, thereĺll be chillinĺ, and most importantly of all, thereĺll be lots of opportunities to make new friends.

If youĺd like to participate but canĺt make in person,áScardyGingeĺs streamáis the place to go to see the whole event live. There might even be a few surprises!

LootScape will be enabled for this special community-driven stream!

This week's Pink Skirts event is a Town Square Q&A, hosted by Princess Rae. Curious to know more about the Pink Skirts and what they do? Then this is the event for you! If you've got questions, or just want to hear some answers, roll on up to Varrock West Bank on World 3 at 23:00 Game Time this Saturday, October 17th.

For more details, check out the Pink Skirts page here.